[dropcap]M[/dropcap]onths meticulously planning The Big Day ended in one of the happiest days of your lives.

Now, it’s time for the fun part: The honeymoon! Each year, around 294,000 couples choose the Hawaiian Islands as their first destination as newlyweds.

But after you’ve frolicked in paradise and watched a Technicolor Hawaii sunset, it’s time to experience outstanding local cuisine.

Hawaii continues to gain a reputation for its rich food scene, the flavorful result of the state’s diverse cultures.

Plus, you’ll find locally sourced ingredients on restaurant menus across the island, including tomatoes from central Oahu farms, beef from Maui, honey from the Big Island, and, of course, fresh-caught Hawaii fish.

Here are 10 romantic Hawaii restaurants worth visiting on your honeymoon across the islands, including the five-star Waikiki restaurant La Mer, Alan Wong’s, a favorite of the former First Couple, the picturesque Hualalai Grille overlooking the 18th green at the Four Seasons Resort Hualalai on Hawaii Island, Merriman’s Kapalua on Maui, and the intimate Gaylord’s restaurant located at the historic Kilohana Plantation.

There’s a reason why one of America’s most adored couples, President Obama and First Lady Michelle, dined at Alan Wong’s during their Oahu vacation each winter.

You can watch Wong’s staff skillfully prepare these dishes inside the Honolulu restaurant, which is located on King Street. Honeymooning couples receive personalized menus signed by the staff as well as a special occasion dessert.

Make a reservation at Alan Wong’s. 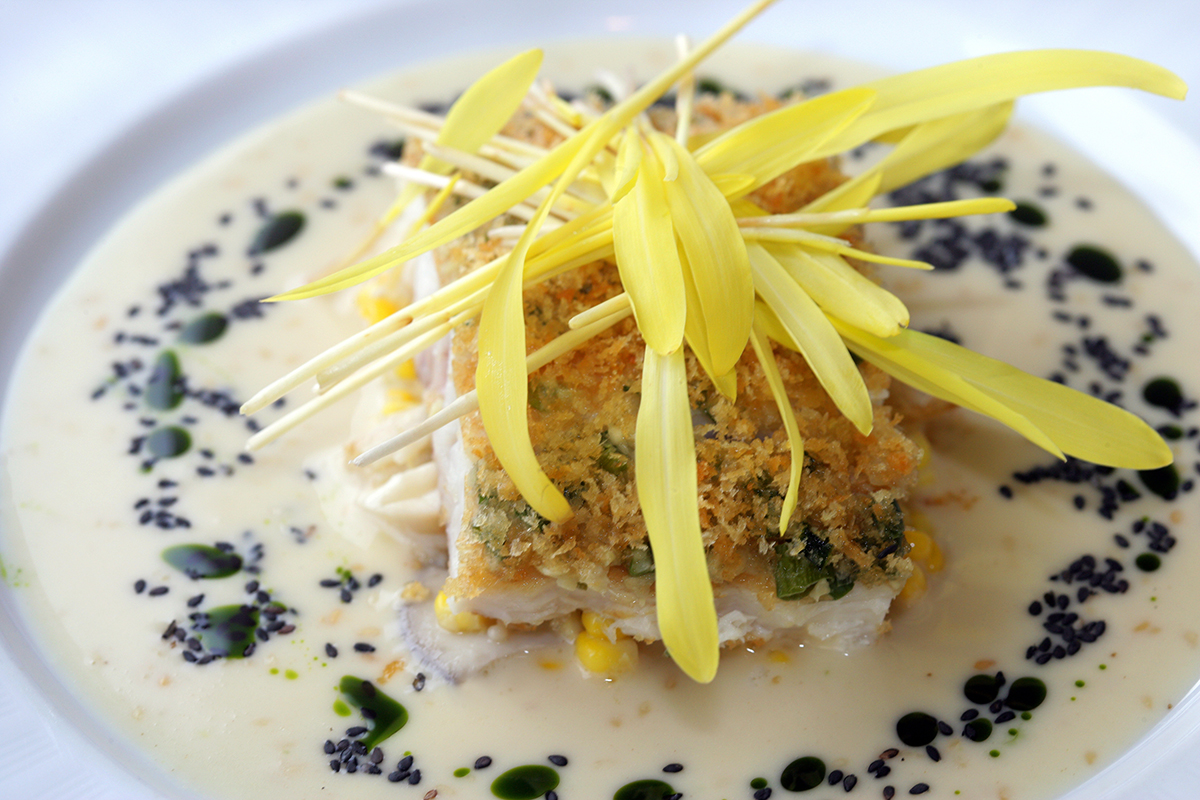 Vacations, especially honeymoons, are all about treating yourself. For the ultimate combination of luxury and romance, book a reservation at La Mer.

Located in the Halekulani Hotel in Waikiki, this southern French fusion restaurant is Hawaii fining dining at its finest — all in an oceanside setting. Go straight for La Mer’s seven-course degustation menu.

Even better, you’ll get the best seat in the house: a window table overlooking the ocean. Make a reservation at La Mer at Halekulani. 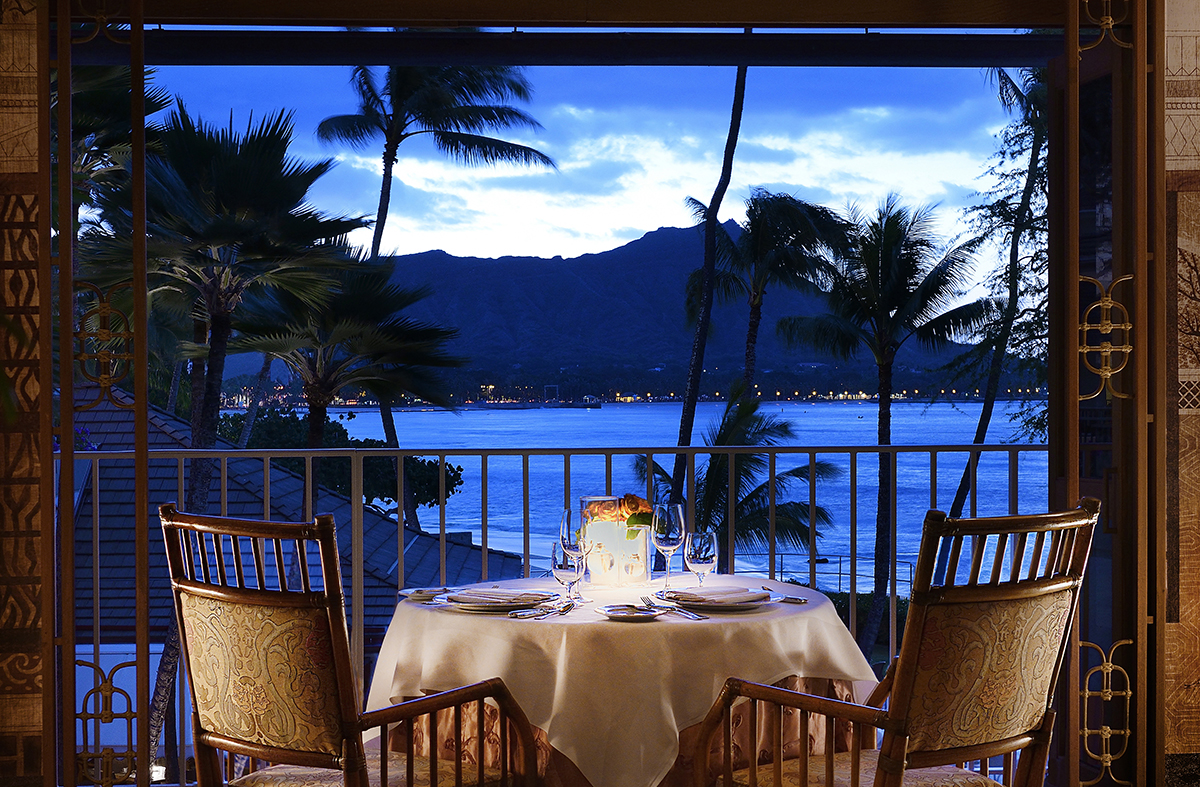 Located in Kahala Hotel & Resort in Oahu’s posh east Honolulu neighborhood, Hoku’s is the hotel’s signature restaurant and offers a luxe dining experience with a view.

The menu is a blend of Hawaiian, Asian, Mediterranean, and European flavors in an array of innovative dishes.

For dinner, Hoku’s offers a prix-fixe menu, a six-course tasting menu, and an eight-course degustation menu.

There are also a la carte and the Hoku’s classics menus, featuring Hawaiian salt-and-herb-crusted Colorado rack of lamb and Chinese-style deep-fried whole fish.

One of the most popular pupu, or appetizers, is the ahi poke musubi, an upscale twist on a local snack favorite.

This one is made with ahi in between the pressed rice and served with crab namasu.

Even better, each menu also has suggested wine pairing for entrees, plus gluten-, nut-, and egg-free designations next to certain dishes, just in case you or your honey have any food allergies. Make a reservation at Hoku’s. 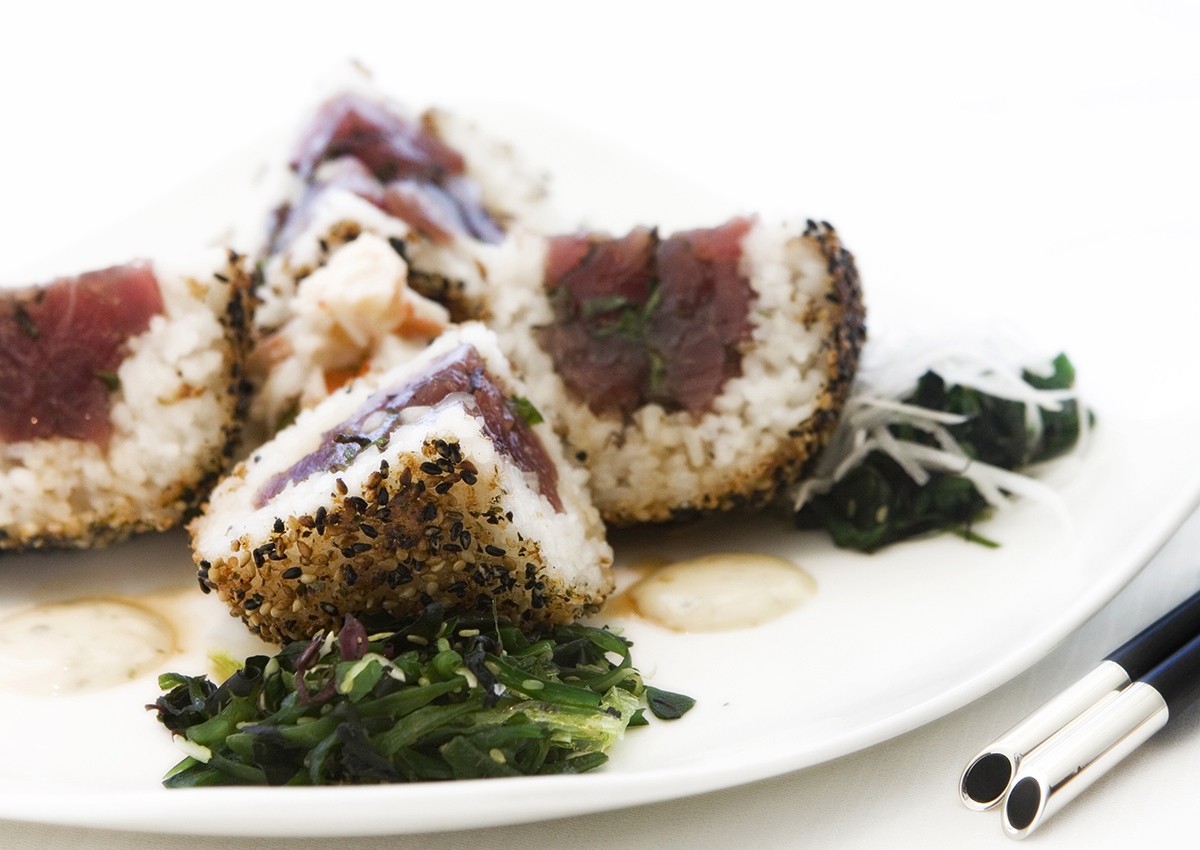 Your romantic evening begins right when you sit down at Merriman’s Kapalua — honeymooning couples will be given a Champagne toast on arrival.

The restaurant is tucked at the northwest tip of Maui, giving you both an unobstructed view of the ocean.

As the name suggests, the restaurant is owned and operated by Hawaii Regional Cuisine chef Peter Merriman. Merriman’s Kapalua features 90 percent locally sourced foods. For those who want to try everything on the menu, you can!

Merriman’s Kapalua also has a sommelier on hand each night, ready to help you pick the perfect pours for each dish. Make a reservation at Merriman’s-Kapalua. 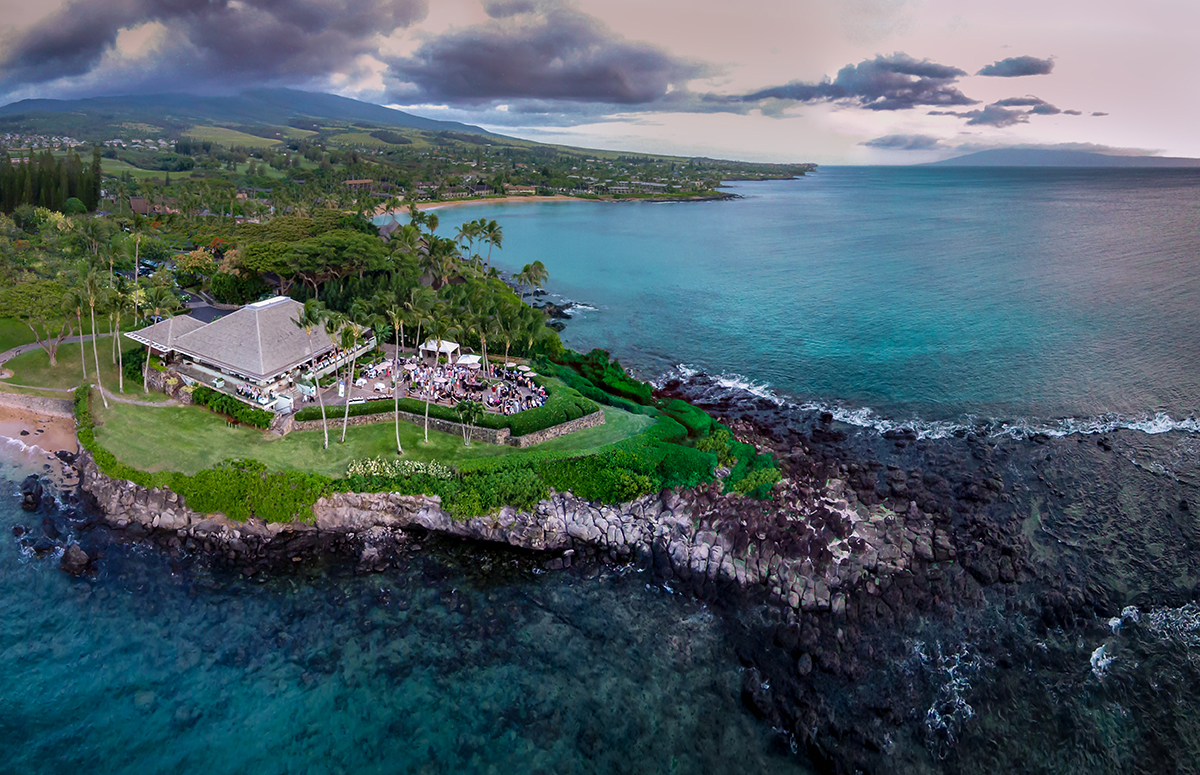 The sunset. The rolling waves in the distance. The seafood with a Hawaii twist.

Mama’s Fish House is exactly the kind of restaurant you want to go to during your honeymoon.

In fact, the restaurant, and the neighboring inn at Mama’s Fish House have been a mainstay for celebrating visitors for decades, so be sure to make reservation in advance.

If you do, you’ll find a personalized card from Mama herself on your table when you arrive. Because you’re in Hawaii, order poke, or raw fish.

The Fish Polynesian pupu or appetizer is a Tahitian style raw fish tossed in coconut milk and lime, fresh veggies and served in a fresh coconut.

The stuffed mahi mahi, with Maui sweet onions and crabs is also a solid choice. And be sure to save room for dessert. 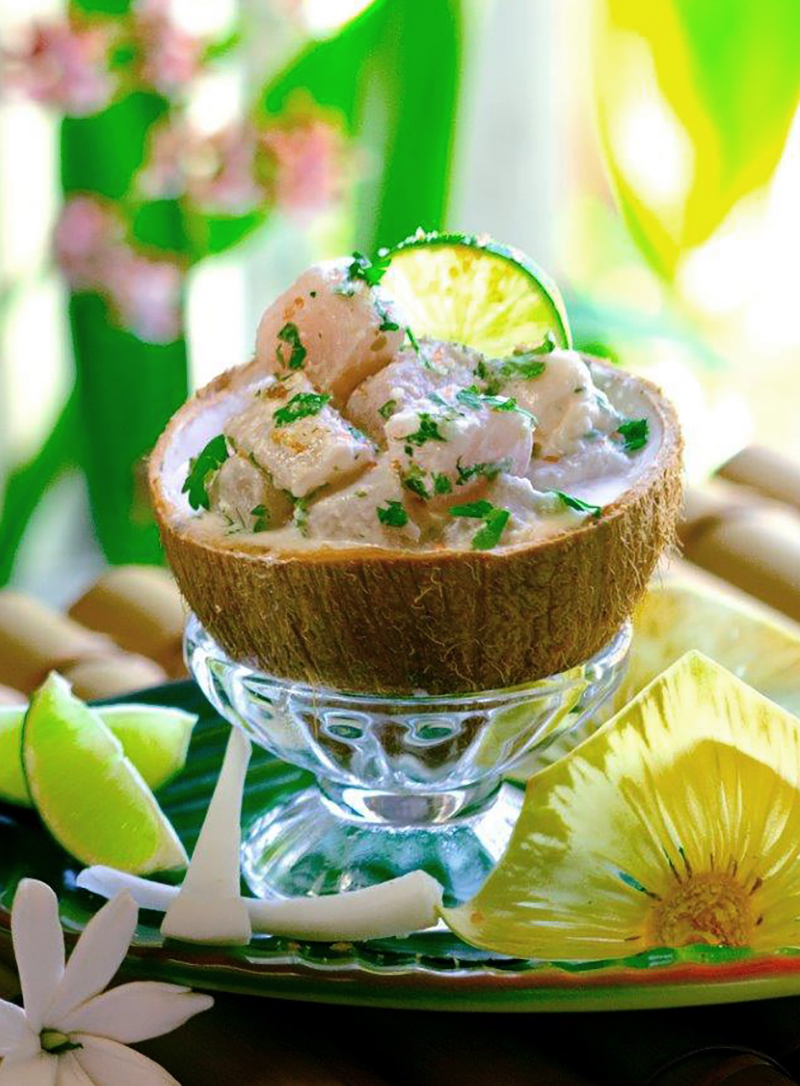 Step into The Restaurant (pictured atop and below), and you’ll feel like your honeymoon has truly begun.

The secluded restaurant is located in Hotel Wailea on Maui’s south shore. In 2016, the hotel became the first Hawaii property to be accepted into Relais & Chateaux, an international association known for its collection of luxury properties. The Restaurant doesn’t disappoint.

Make reservations for the private “tree house.” Really, it’s an elevated dining room surrounded canopy of mango and avocado trees, but you’ll both feel like you’re in your own private sanctuary.

Chris Kajioka and Anthony Rush are the co-executive chefs of The Restaurant; you might recognize their names during their time at The French Laundry as well as Per Se. Maui-raised chef Zach Sato is the restaurant’s chef de cuisine.

For the main dish, order the short rib bolognese or the macadamia nut crusted Colorado lamb chops. Make a reservation at The Restaurant at Hotel Wailea. 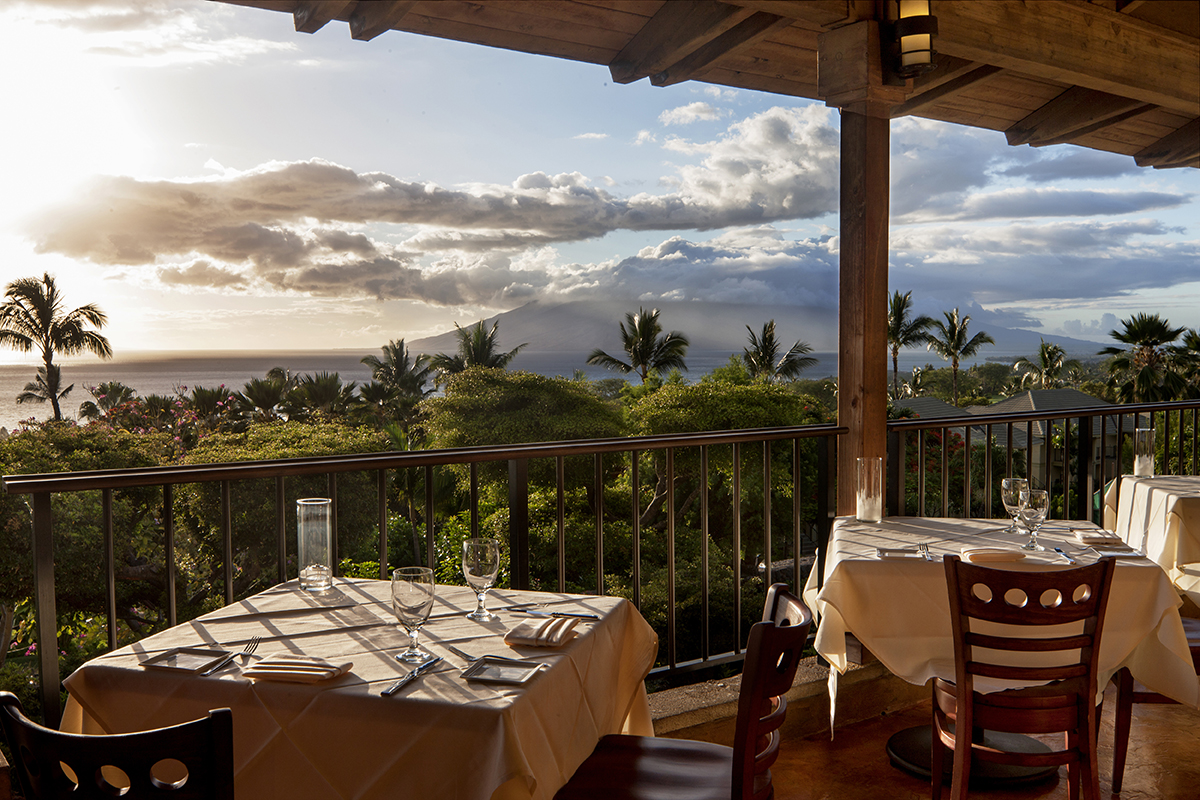 At Hualalai Grille is all about the little things for their newlywed guests. The steakhouse is located above the 18th hole of the Hualalai Golf Course on the Four Seasons Resort Hualalai in Kailua-Kona on Hawaii Island.

You’ll get the best seat at the restaurant with a view, plus a personalized dessert. Since Hualalai Grille is a steakhouse, the restaurant is known for its prime cuts.

Its signature steak is the Chateaubriand, an impressive 18-ounce grass-fed tenderloin filet served and cut tableside by the Grille’s chef, James Ebreo.

For something on the smaller side, there’s the 6-ounce or 8-ounce filet mignon. Round out the meal with some hearty sides, including Hamakua mushrooms, keawe-smoked Hilo corn, and roasted garlic smashed potatoes. Make a reservation at Hualalai Grille. 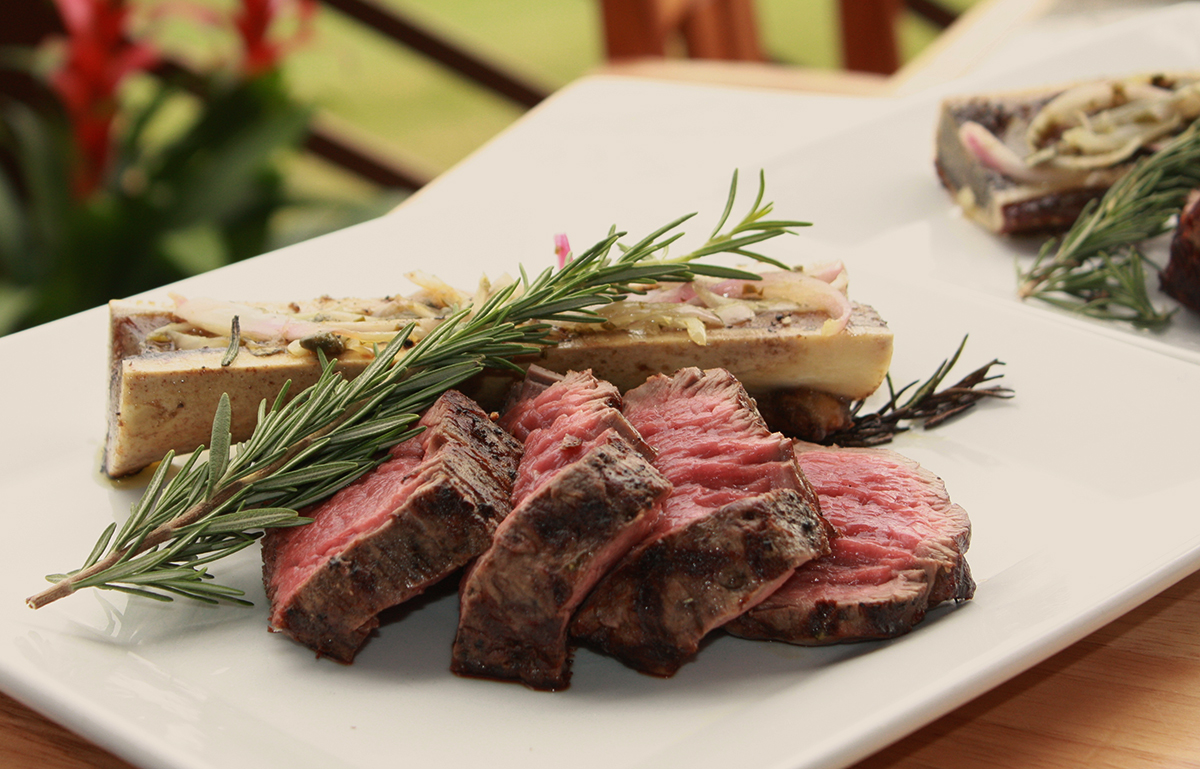 Located in the Fairmont Orchid in Waimea in north Hawaii Island, the restaurant specializes in Island-inspired dishes and has an excellent wine list.

For an entree you’ll be reminiscing about long after the trip is over, order the crab-crusted Kona kampachi. 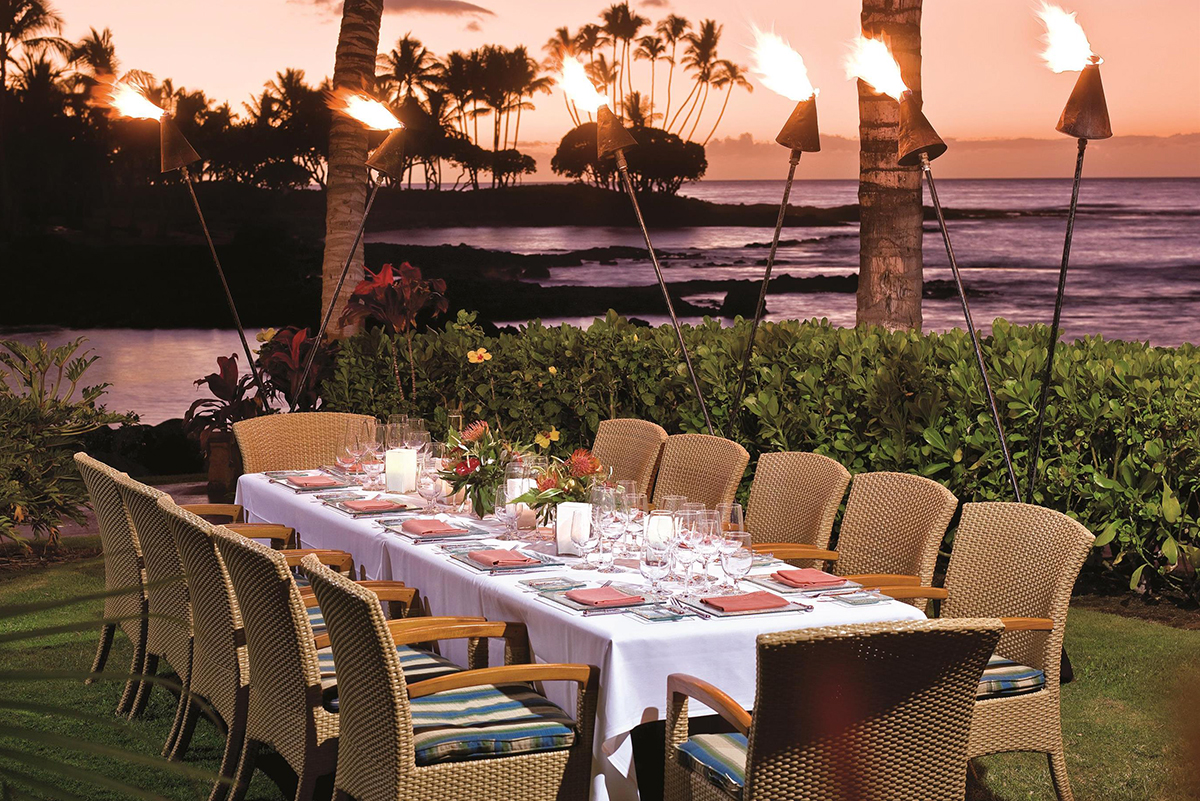 For a unique dinner locale, head to the Kilohana Plantation, located in Lihue on Kauai. Nestled on the 67-acre working farm is Gaylord’s restaurant.

The 31-year-old restaurant is open for brunch, lunch, and dinner and serves Hawaii-inspired seafood dishes, salads, and pastas.

Honeymooning couples can dine in the lush courtyard or under a private veranda.

Crowd-pleasing dishes are the grilled catch of the day with lemon herb risotto and the hoisin-glazed pork spare ribs with pineapple fried rice. Make a reservation at Gaylord’s at Kilohana. 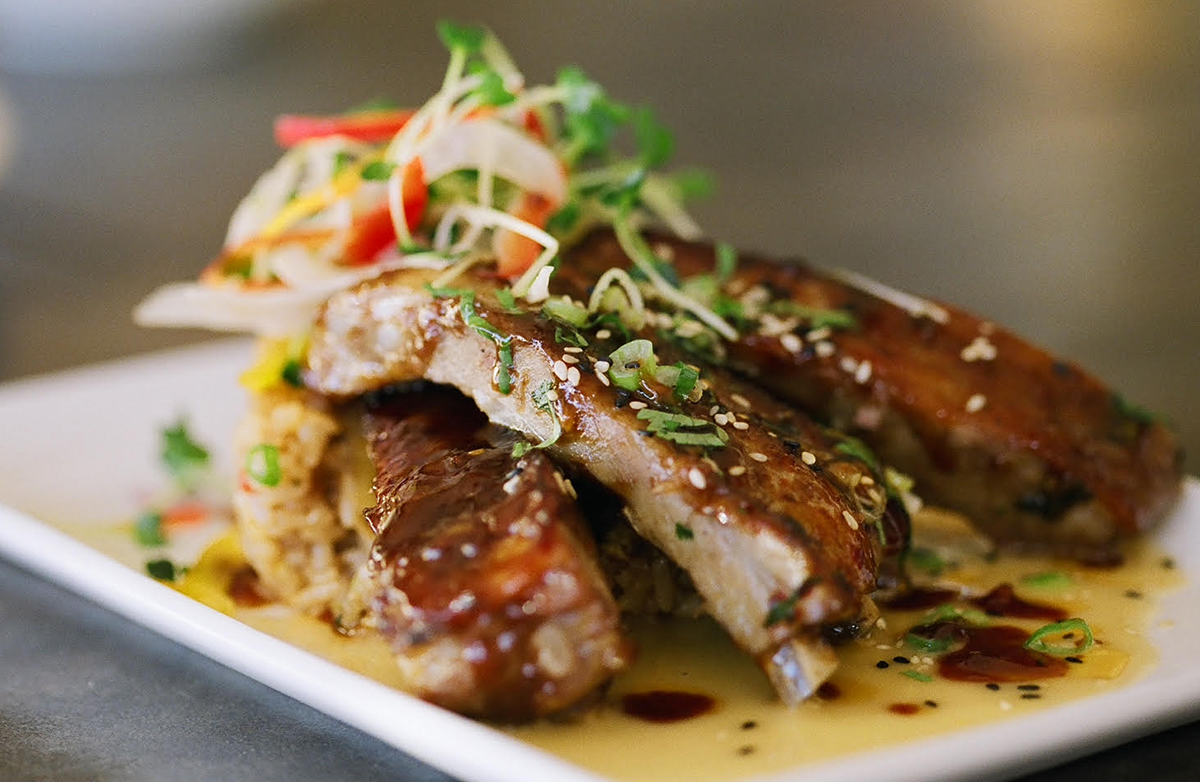 Tidepools gives itself away in its name. Located in the Grand Hyatt Kauai Resort and Spa, you can dine under thatch-roofed bungalows as you gaze at the glassy koi-filled lagoon.

But while many are initially wooed by Tidepools because of its uber-romantic ambience, the restaurant’s dishes are equally stunning.

The dinner menu entrees are divided into two traditional sections — “From the Sea,” and “From the Land.” But whether you order fish, such as the macadamia nut-crusted mahi mahi, the opah, or the 30-day dry aged local Makaweli rib eye, you’ll love every bite. Make a reservation at Tidepools. 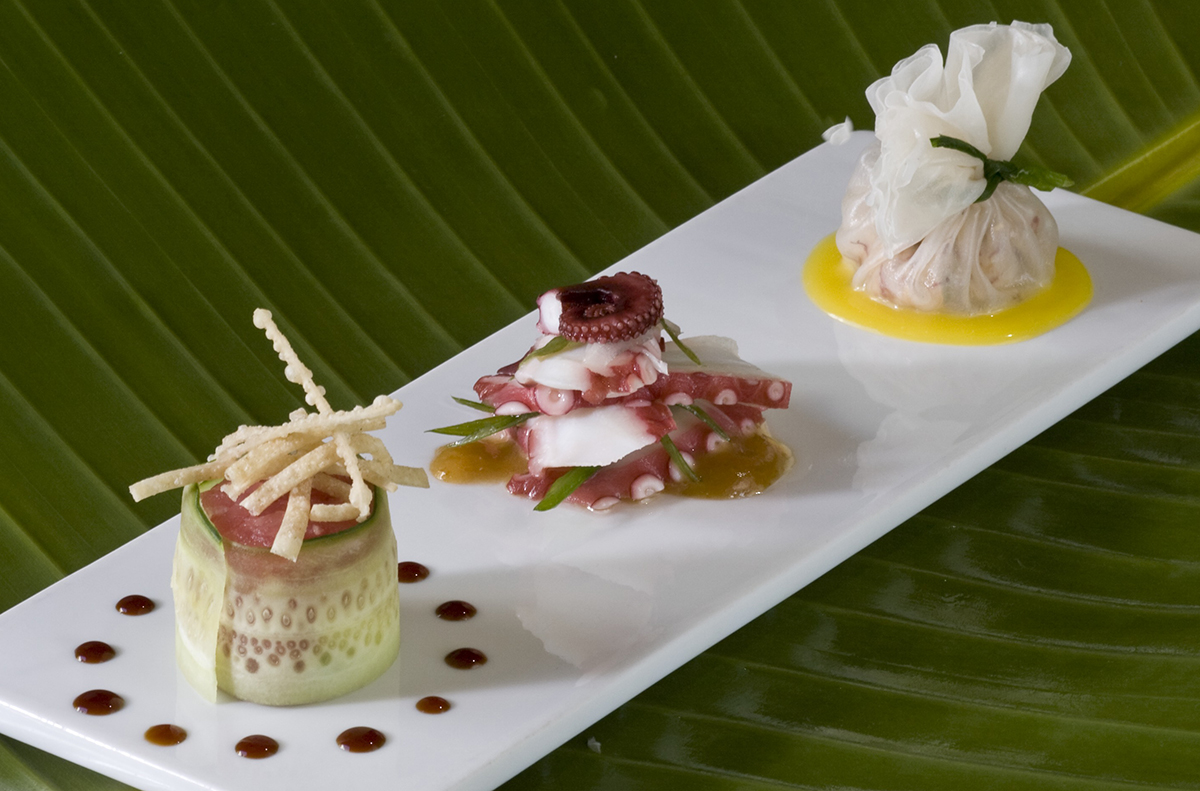