The weekend did not start as expected for the young driver Celso Neto (17) and his team, Amed/Brandão Motorsports, during the third round of the Stock Car Series, former Light category, at the Velocitta racetrack in Mogi Guaçu/SP.

After difficult practices and qualifying, the driver suffered from brake problems and in the first race of the weekend on Saturday (14) a brake failure frustrated the team’s plans, which abandoned the race early after a collision that severely damaged the front of car number 22.

In the second race on Sunday (15th) the driver started on pole by virtue of the regulations. With a wet track he lead for more than halfway through the race when, on a quickly drying track, the car lost performance to those with slick tires and even then, Celso took 5th place in the overall results. He was once again the best rookie in the series, receiving the Rookie trophy, the third in three race weekends. 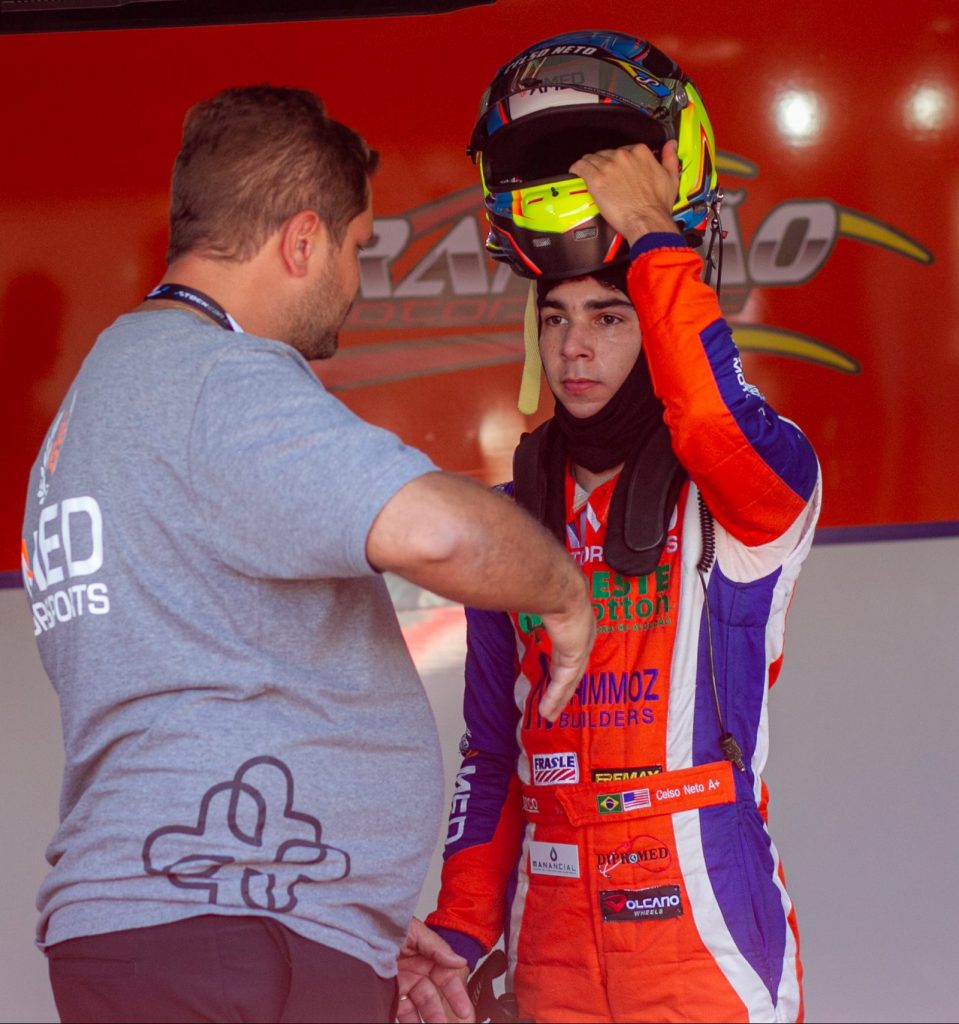 It was the team’s best result in its rookie season. The decision of Stuart Turvey, the team’s engineer, to be the only one to start on wet tires, made the difference.

Another key piece for this result was all the mentoring and coaching of fellow driver Beto Monteiro who participates in the Stock Car Pro Series and Copa Truck. Beto guided the driver throughout the weekend and helped manage the race in the most efficient way, taking care of the tires in the race that lasted more than 30 minutes. All tips and work on the radio added to Celso Neto’s performance.

“It was a great rebuilding job that lasted all night. We had to bend over backwards, but it was worth it, credit to our entire team, who showed that they were adapting well to the new category. It was a great performance and a spectacular team effort”, reported Hélio Brandão, head of AMED/Brandão Motorsports.

“It was another great learning experience for all of us, Velocitta is a very technical track, with ups and downs, very mixed and different from the previous stages (Goiânia and Galeão/RJ), perhaps the most difficult of the entire season and for all of us , that participated in this circuit for the first time, it was really great”, said Celso Neto.

On Friday, the team announced another new partner in the season, it is Sicoob Credpit, a banking cooperative based in Pitangui/MG, the institution joined AMED S/A, Oeste Cotton, Dipromed, Primmoz Builders, Supermed, LS Inter Bank, RGE Energia and Lavoy.

“These are companies that believe in our work, they know that it is a year of learning, both for the team and for the driver. We debuted this year, we knew that the objective was development and even so the sponsors are trusting and even being surprised with the season” revealed Brandão. The next challenge will be on July 2nd and 3rd, at Velopark.