Celso Neto takes Brazil to the podium in the USA

With only 17 years of age, Brazilian driver Celso Neto was responsible for the Brazilian flag on the TC America podium, in the difficult races held this Saturday (20) and Sunday (21) at the Road America circuit, in Elkhart Lake, Wisconsin – USA. 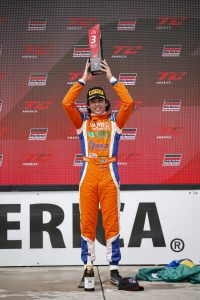 In qualifying Celso showed he adapted well to the long and technical track and set the fourth best time.

In the first race, after a tough race in rainy weather and with several accidents, the Brazilian driver finished third, to the delight of the American and Brazilian fans who were at the track and who followed the race live on the Internet.

In Sunday’s race, he took fourth place, showing great development since his debut 30 days ago at Watkins Glen in New York State, when he took seventh place.

“They were two very difficult and challenging races, in the first one I didn’t start well, I was fifth, but I made a recovery race, I managed a beautiful overtake on the outside of turn 13, which guaranteed my first podium in the series and the first Brazilian to achieve this feat”, said Celso.

It was only the young driver’s second race weekend in the US. The result surprised everyone and was widely reported by both the Brazilian and foreign press, mainly because of the difficult track conditions and Celso Neto’s adaptation to adverse situations. 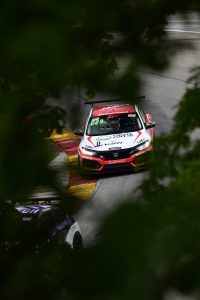 “In Sunday’s race I was third, but I managed to defend fourth place, even being attacked by the fifth and sixth places. Our Honda proved to be fast, reliable, and the whole team was very happy with the result,” he concluded.

The next race will be from September 23 to 25 in Sebring, Florida, the state in which the driver lives.