While the $2.3 billion I-4 Ultimate project will take until 2021 to complete, the first ribbon cutting ceremony along the corridor took place last week. The Grand National Drive overpass officially opened August 9.(Image via FDOT)

The new overpass connects the north I-Drive area directly to Major Boulevard via a new Grand National extension over I-4.

It also allows for much easier access to the outlets and Fun Spot from the Universal Orlando Resort.

Sidewalks varying between 8 and 12 feet wide make the new overpass safe for pedestrians and bicyclists.

Team Members and guests headed to Universal from the Curry Ford area can now easily ride their bikes there via the new overpass.

Designed to accommodate more than 1,000 vehicles per hour the new overpass will help alleviate demand on Kirkman Road and Universal Boulevard.

The new overpass means that drivers can now drive across Kirkman turning right on Grand National, right on I-Drive, then use the Kirkman eastbound on-ramp instead of the Universal Boulevard one. 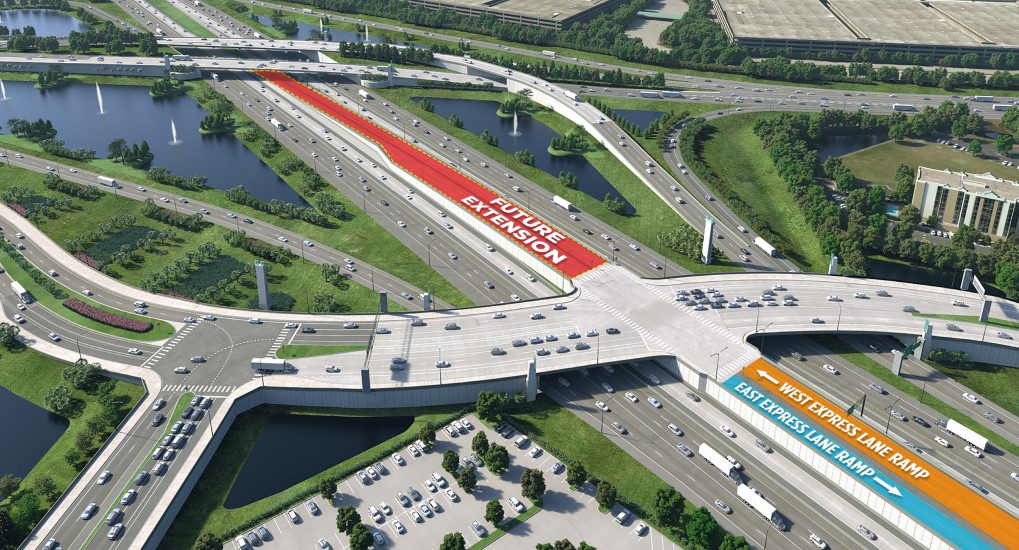 This new overpass also will help with planned late-night closures of Kirkman in the coming years as that area receives major updates as part of the I-4 Ultimate project.

The Kirkman interchange is still a full-on construction site as they shift the off ramps from the left lanes to the more traditional right lanes.

The new overpass may be open, but construction around it is far from being finished.

The Grand National overpass will eventually become an interchange with eastbound (north) on and off ramps linked directly to the I-4 Ultimate Express toll lanes.

On the western side of the overpass on and off ramps will be built but not opened for the ‘After the Ultimate’ I-4 project that will take the updated interstate design all the way to Hwy. 27.

Two nine-story towers will be constructed on either side of the overpass, similar to one currently under construction near Lake Ivanhoe, signaling that this is where you can access the Express Lanes from surface streets.

The towers will feature a light package so that they can be easily seen at nighttime. The Express Lanes will open in 2021.

Along with the new towers, the area has an impressive landscape package with nearly 450 trees and more than 700 shrubs. Altogether the I-4 Ultimate project will see $28 million spent on Florida friendly landscaping including nearly 40,000 shrubs and more than 14,500 trees.

The first vehicle to drive over the overpass was a restored 1929 AA Ford Truck known as DOT 1. Grand National Drive is the only new vehicle overpass being built as part of the Ultimate I-4 project.

A pedestrian overpass is planned for near the Maitland Boulevard interchange.