On a foggy morning, Charlie Pickering climbs up the side of Orlando’s tallest roller coaster into the clouds.

Occasionally, a bird attempts to build a nest on top of SeaWorld’s 200-foot-tall Mako or lightning strikes a sensor or a pesky squirrel chews on a cable. But not today.

Everything is routine before the park opens in a few hours.

In the theme park industry, some employees such as Pickering have extraordinary-sounding jobs.

They ascend hundreds of feet into the air to inspect the tops of the attractions and are the solo riders on the roller coasters when the parks are empty.

Safety is paramount, and these jobs are important as a preventative measure to make sure everything is working properly, theme park managers say.

“If the guys don’t do their inspections in the morning, the ride shouldn’t run.”

They inspect everything from the trains’ harnesses and brakes to the sensors that show where the roller coasters are on the track.

Every year, the maintenance team takes apart and reassembles each roller coaster train — a process that takes four months.

The importance of preventative ride checks is echoed at other attractions.

Coca-Cola Orlando Eye technicians climb a set of ladders to reach the hub halfway up the 400-foot-tall wheel to get a full view.

They may start at 3 or 4 a.m., although their preferred time is sunrise, said general manager Jacob Kristensen.

Each of the 20 or so technicians spends 1,400 hours — the equivalent of 58 days a year — on inspections that look for changes in how the wheel sounds, moves, looks and feels, Kristensen said.

Disney and Universal Studios Orlando declined to comment for this story.

The state’s largest theme parks, such as Walt Disney World, Universal Orlando and SeaWorld, do not undergo state inspections.

They disclose how many injuries occur four times a year to the state.

Many of those injuries or illnesses reported are from ride-goers with medical conditions.

State inspectors, however, do visit smaller attractions, such as Fun Spot, as well as fairs and carnivals. 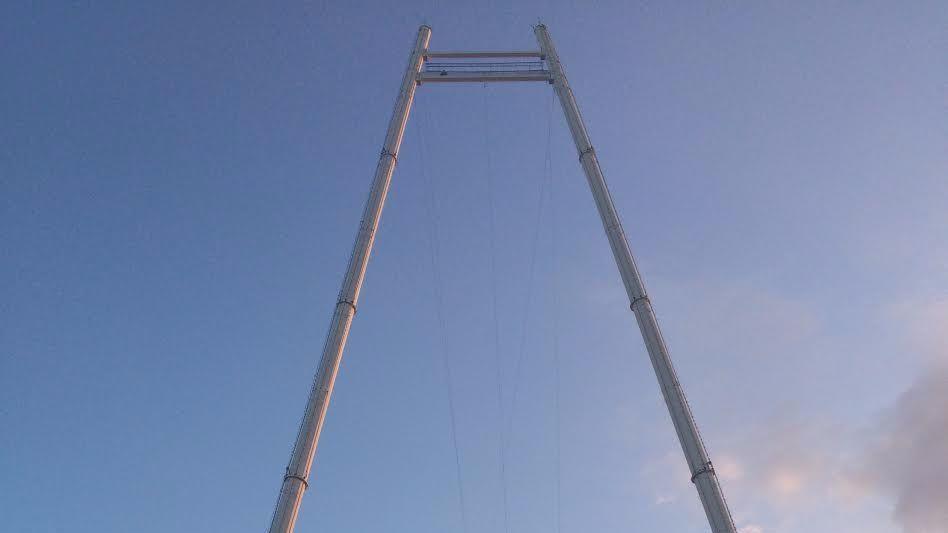 Growing up, Jay Boggs hated heights, a fear that never went away into adulthood.

So there’s is a cruel sense of irony that part of Boggs’ job for the past 10 years at Fun Spot Kissimmee is to climb the top of the Skycoaster every week.

The Skycoaster is a 300-foot-tall H-shaped tower where brave riders are dropped from the top and swing at speeds as fast as 80 mph.

Down below, the other Fun Spot employees check the harnesses and ride it for daily inspections.

Boggs, 43, is harnessed to a safety cable, which eases his mind as he looks for loose bolts and damage from squirrels, and checks to make sure the device that measures wind speeds is working.

The tower sways — it’s supposed to — and he passes wasps that ignore him.

But time has lessened his fear from his first trip up.

On a clear day, he can see as far as Clermont’s Citrus Tower and can point to the downtown Orlando skyline.

“You’re just by yourself. You can see for miles,” said Boggs, manager of the park. “There’s a little breeze. It’s beautiful up here.”

Boggs sends his mother, who lives in North Carolina, photos from the top.

But Brenda Boggs doesn’t want to know when he’s going up, she says.

Just when he’s back safely on the ground. 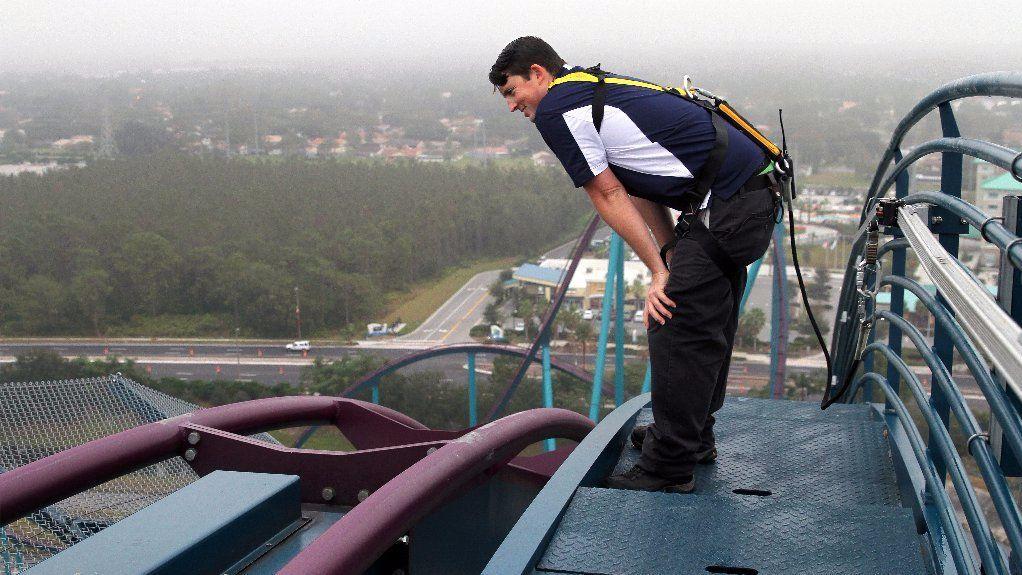 At SeaWorld, Pickering takes a moment to catch his breath on top of Mako.

He is so high, he is caught in the mist. He can see construction on the new Infinity Falls ride that’s hidden from the ground.

Theme parks feel like a strange, peaceful world in the early mornings.

Sea lions, waking up, bark. Another roller coaster whizzes by with ghostly passengers — more maintenance checks — but no one is screaming.

Pickering, an Orlando native fascinated by robotics in high school, climbs back down.

He is the lone rider when he sits in the front row of the coaster parked in the empty queue.

He will disappear mostly out of sight from the public’s view when SeaWorld opens an hour later.

The roller coaster jets off for the loop Pickering just climbed. His hands rest on the harness. His face is devoid of emotion.

“After you’ve ridden it enough times you know which turns are coming up and how you’re going to feel on it,” Pickering says.

“But it’s always fun and exciting — it’s just a different kind of exciting.”

This article was originally published by: orlandosentinel.com