[dropcap]A[/dropcap]midst an ephemeral world of fleeting fashion, fast food, and fake news, the latest Rolls-Royce Phantom is a stalwart exemplar of tradition, quality, and authenticity.

The name, suggesting a ghost or spirit creature, is hardly new.

In fact, Phantom is the oldest model name in automotive history.

The first one was made in 1925, and many of those early cars are still motoring along very well, thank you.

With almost a century to separate it from its patriarch, the 2018 Phantom ushers in the eighth generation of the Rolls-Royce flagship, giving a clear nod to the past while defining the future of luxury as only Rolls-Royce can proclaim it.

With a patience rivaling that of a 17-year cicada, Britain’s oldest automaker is anything but hasty; it’s not every year that Rolls-Royce Motor Cars sends a new model down the runway.

In fact, the last time a new Phantom broke cover was in 2003. The Phantom VII replaced the Phantom VI that had been introduced 35 years earlier.

The Phantom VII was a game changer for the Rolls-Royce marque, which was acquired in 1998 by BMW.

Newly committed to becoming a thoroughly modern brand and operating with near-total autonomy (although it was being bankrolled by its German parents), Rolls-Royce built a state-of-the-art factory at Goodwood in West Sussex, England, and set about creating a new luxury benchmark.

The Phantom VII was just that, expressing a bold design and employing the latest technology while preserving an old-world ethos of wood and leather that the Brits do like no one else. 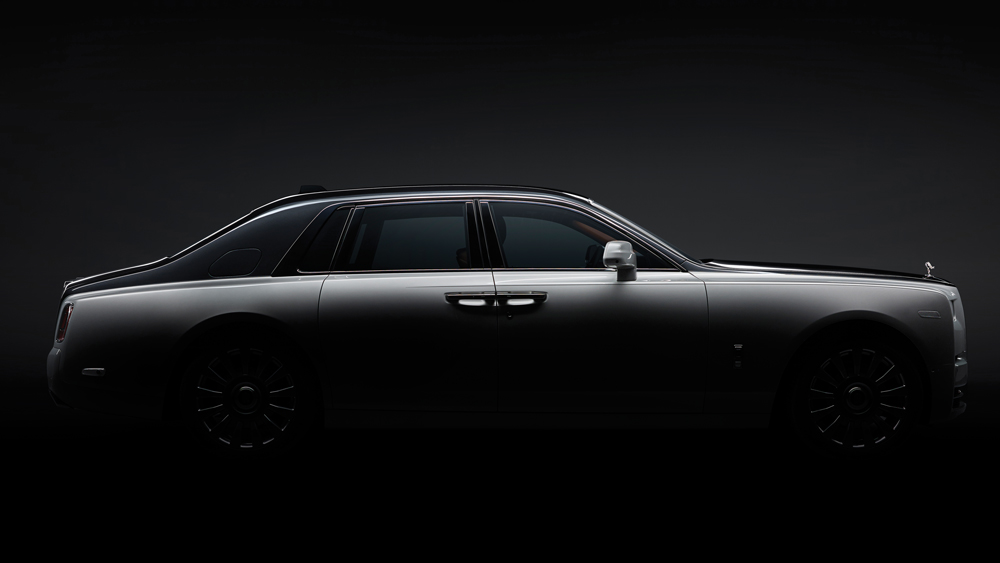 That VII created quite a stir. Rolls-Royce chief designer Ian Cameron and exterior designer Marek Djordjevic elegantly juggled historic precedent and contemporary vision by respecting a formal design vocabulary while preserving the iconic characteristics of every Phantom before:

Unabashedly monumental, the VII’s grille cut the airstream with the force of a Freightliner, yet the overall design was so remarkably fresh—and the car so intrinsically good—that it launched the marque into a second century of success.

Giles Taylor, director of design at Rolls-Royce Motor Cars since 2012, was the man with the heavy responsibility of making the Phantom VIII the best Phantom yet. Alongside its predecessor, the new Phantom’s evolution in design is evident, and it becomes clear how much more contemporary the newer car appears.

The VIII’s almost monolithic design was made possible in part by a precision joining process that eliminates most of the visible joint lines between body panels.

While the hand-polished stainless grille sits higher than before, for the first time on a Rolls-Royce it is integrated into the surrounding bodywork and not sitting proud of painted surfaces.

The mile-long hood is now without embellishment; no center spear or style lines complicate the clean and expansive surface.

Similarly, the headlights are all updated, with the new laser lamps employing a somewhat softer light with a range of nearly 2,000 feet. 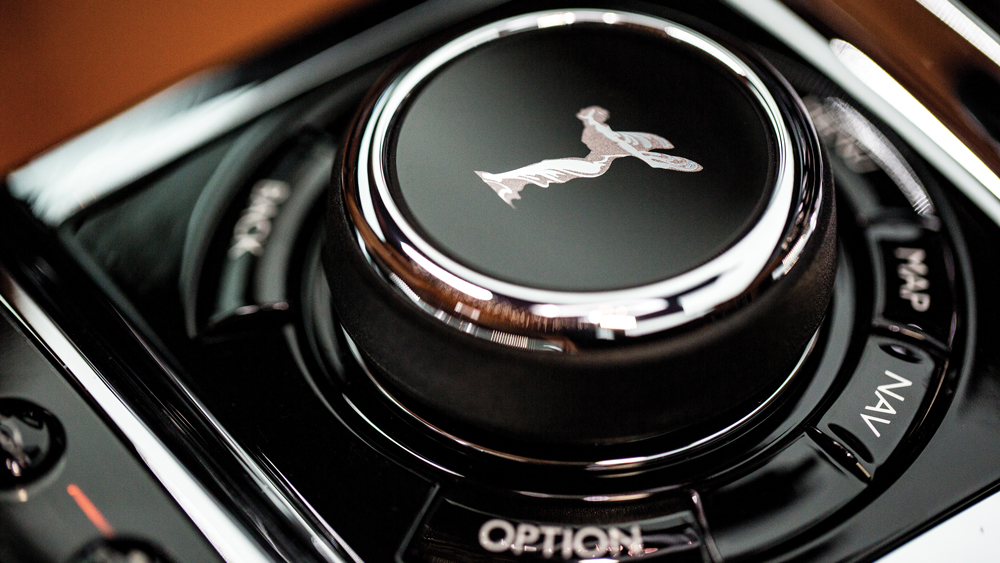 But the Phantom VIII—which is priced from about $450,000 and arrives in the United States in spring 2018—still has a formal presence like no other luxury sedan.

This is partly attributable to its classic 2-to-1 proportion that establishes a style line above the tops of the wheel wells at two-thirds the height of the roof.

The wheel rims are 22 inches in diameter and rest on Rolls-Royce Silent-Seal tires that contribute to a ride quality aimed at being superior to that of any other automobile.

Understanding that the Phantom VIII would be an imposing sight, Taylor wanted every occasion of its appearance to engender goodwill among other motorists through its slightly softer stance, coming or going.

To that end, the rear of the car is smoother, sleeker, and more raked and elegant, with tail lamps that seem to say, “Excuse me, please, with sincerest thanks,” when passing.

And passing is something the Phantom VIII can do with all the power and fury of the Cretaceous period’s tyrant king, Tyrannosaurus rex. Yet unlike a dinosaur, the Phantom VIII moves silently, and while its driver may steer it, technology is really the one driving the new Phantom.

The “Architecture of Luxury” is how the manufacturer describes the Phantom VIII’s all-aluminum spaceframe chassis.

Thirty percent more rigid than its predecessor, it is lighter and stiffer than conventional unibody designs employed by larger-volume manufacturers.

It also allows chassis optimization for both the standard-length and extended-wheelbase versions of the four-door Phantom VIII. (Unlike the Phantom VII, no two-door coupe or drophead versions are planned.) 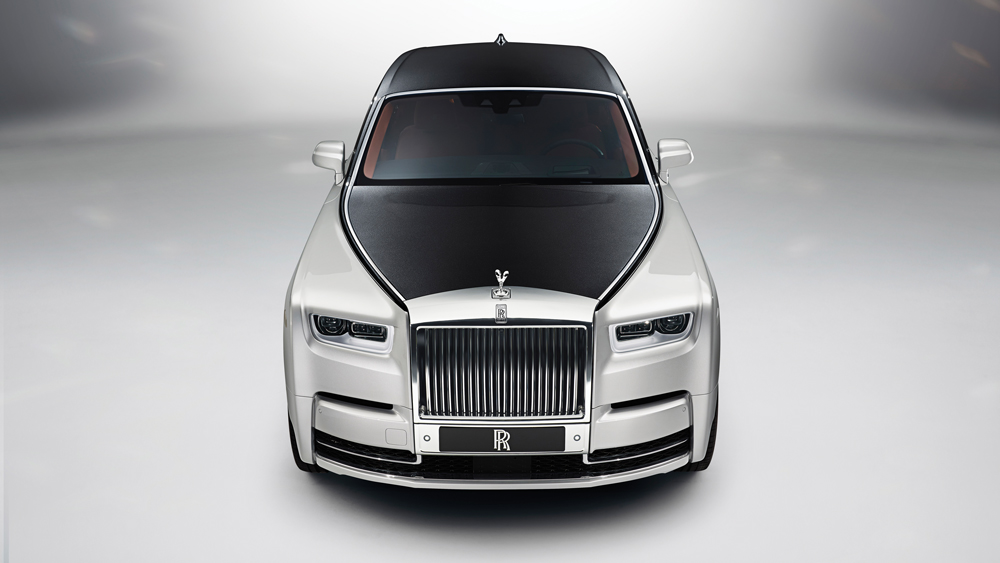 Suspension at either end is new, with double wishbones at the front and a five-link rear-axle design.

Handling and agility are enhanced by four-wheel steering and complemented by self-leveling air suspension that makes millions of calculations per second to adjust electromagnetic shock absorbers.

Rolls-Royce has always described the ride characteristic of its cars as “wafting,” a word that aptly suggests the ease with which one floats above the road, in the same manner that a Rolls-Royce figuratively elevates itself above quotidian traffic.

Lyrically, Rolls-Royce equates this exalted form of comportment to a “Magic Carpet Ride,” though one should note that the Phantom’s floors are covered in lamb’s wool and not the hot-rod rug in One Thousand and One Nights. 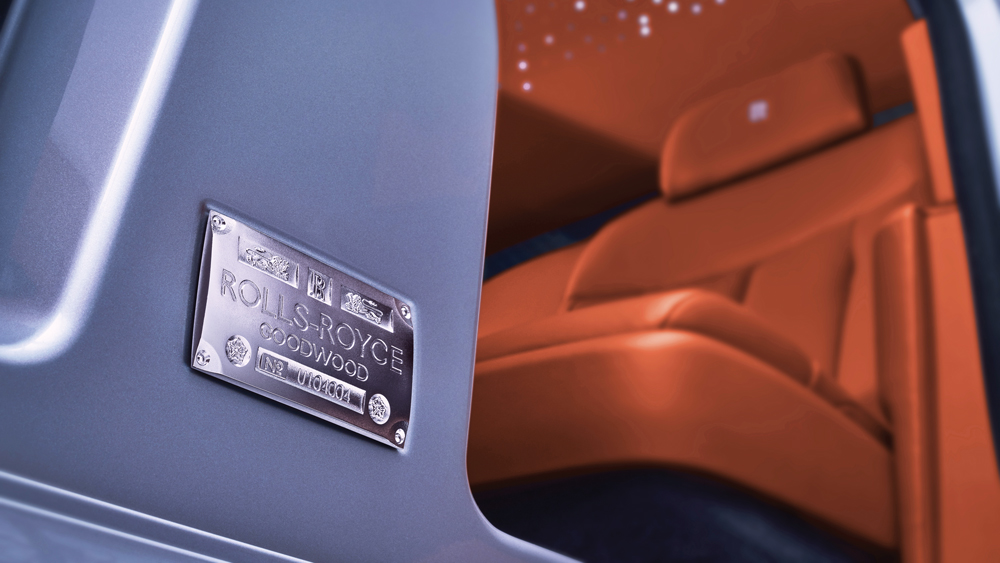 Apropos of hot rods, the new Phantom uses a 6.75-liter V-12 engine of identical displacement to its predecessor but with an entirely new design; it is immediately distinguished by twin turbocharging that results in greater power and torque with reduced emissions.

The smooth, quiet engine develops 563 hp and, importantly, an ample 664 ft lbs of torque in full bloom from only 1,700 rpm. Speed is electronically governed to 155 mph, and 60 mph is achieved from standstill in 5.3 seconds.

First developed for the Rolls-Royce Wraith, this transmission is linked to a GPS receiver that analyzes data to determine optimum gearing for road and traffic conditions.

he phantom viii could claim to be the most luxurious automobile ever made.

The tasteful understatement of its interior is in perfect keeping with the marque’s well-bred demeanor. Such refined elegance is not easily achieved.

The interiors of many so-called luxury cars are compromised by designers’ horror vacui and a failure to understand that true luxury needn’t ladle on disparate forms, surfaces, and materials.

Plus, the Phantom’s insides don’t obligate a driver to conduct an orchestra of complicated controls and subsystems that create a cacophony of visual noise and confusion. 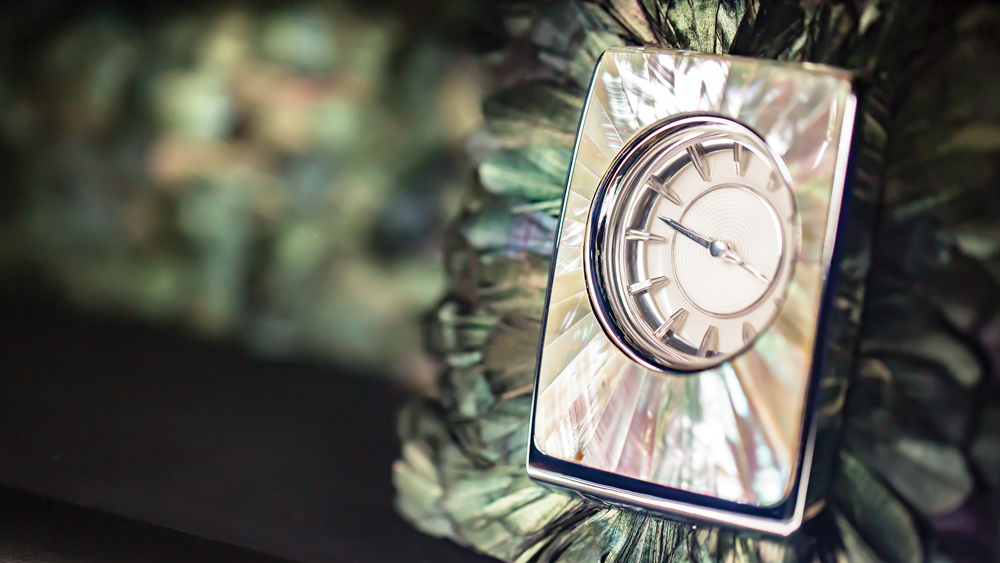 The analog clock in “the most silent motor car in the world.”
Photo: Courtesy Rolls Royce

With a nod to occupants’ tranquility and composure, Rolls-Royce has always engineered its automobiles so that the analog clock is the loudest sound one can hear inside the cabin.

Quieter than ever before, this pin-drop environment is in part a product of 286 pounds of sound insulation, thick double-layer glass, and other high-absorption materials that make the Phantom VIII what Rolls-Royce calls “the most silent motor car in the world.”

The cabin is indeed a serene environment and is equipped with numerous electronic assistants that serve without being asked, and only when needed.

The Attentiveness Assistant monitors a driver’s eye movement to detect decreasing attentiveness and impending drowsiness, while panoramic and helicopter-view cameras aid in maneuvering the substantial vehicle.

Rolls-Royce eschews the practice of other luxury automakers that brand their entertainment system with someone else’s logo.

Instead, company engineers design a specific system for each model alone. For Rolls-Royce, there is no other way. 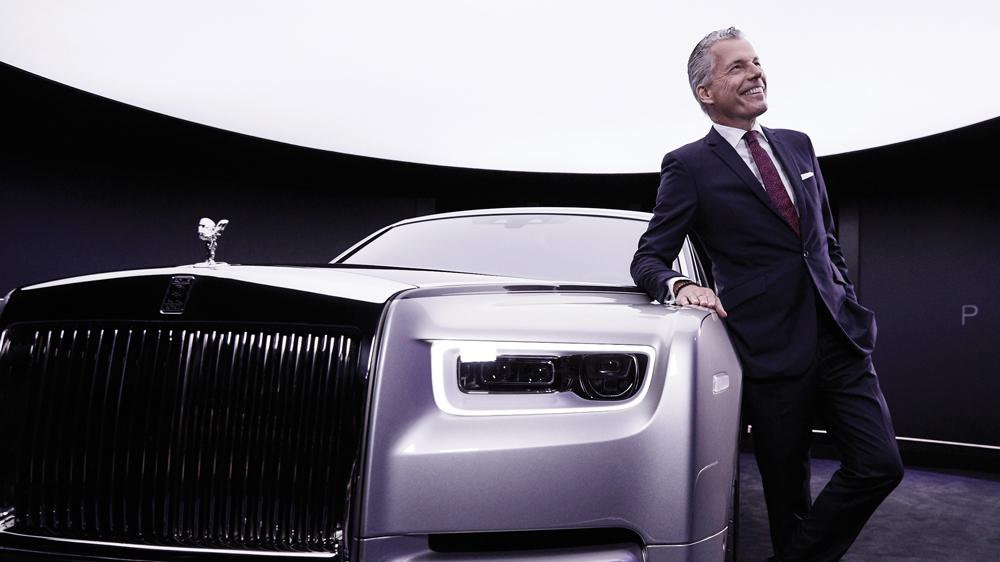 The sky is literally the limit when appointing the Phantom VIII interior.

Clients can specify the largest Starlight headliner ever offered in a Rolls-Royce.

Each skyscape is designed in a specific celestial pattern to replicate the client’s preferred constellation.

On terra firma (or at least ensconced in one of the Phantom’s sumptuous seats), one imagines sitting atop the hides of virgin unicorns, so supple, soft, and flawless is the leather that swathes almost every surface of the cabin.

In perfect counterpoint to these warm, natural surfaces, tactile wood paneling finished in a variety of types and levels of gloss can be specified for door interiors, center consoles, dashboards, and picnic tables.

Those tables have become a sacrosanct feature in the rear cabin of every Rolls-Royce, and combine with rear theater monitors that electrically deploy and retract at the touch of a button. 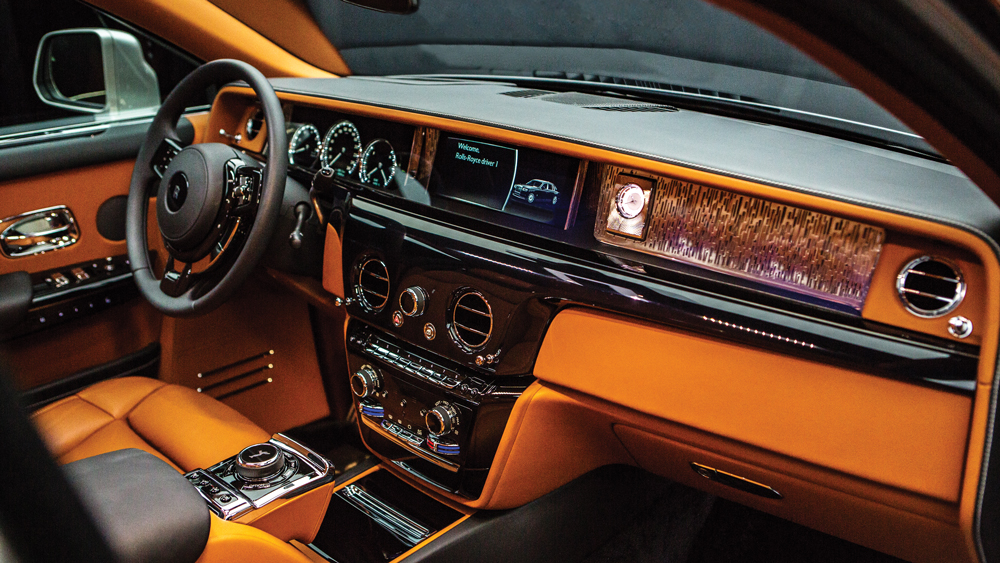 Prominent within each bespoke interior is the Gallery, a dashboard-length display presenting gauges and owner-​commissioned artwork
Photo: Courtesy Rolls Royce

The most novel feature of the Phantom VIII is surely the Gallery, imagined by Taylor to be an uninterrupted panel of glass that spans the full width of the dashboard and instrument panel.

Behind this sit essential components like the speedometer and clock, and a much broader expanse becomes an area to display bespoke works of art.

Customers can choose an artist to work with Rolls-Royce to decorate the space; the factory has already executed oil paintings, feather collages, porcelain roses from Nymphenburg, and even a gold-plated 3-D-printed map of an owner’s DNA created by Thorsten Franck.

Buyers in a hurry can specify a standard Gallery in silk, wood, metal, or leather.

No carmaker does bespoke like Rolls-Royce, and it is here that one can express one’s own aesthetic sensibilities—for good or ill.

Rolls-Royce designers will consult with customers and gently guide wayward notions in the right direction if asked, although few combinations are off-limits for the truly determined.

For those so disposed, the Phantom VIII becomes a boundless palette from which to paint a personal vision.