“Very noisy,” he told the Associated Press by text message. “Shingles are coming off.”

Hurricane Irma made landfall at Cudjoe Key at about 9:10 a.m. Sunday, passed over the water and again made landfall in Marco Island near Naples at about 3:30 p.m.

It headed for the southwest Florida coast with maximum sustained winds at 110 mph — meaning it has weakened to a still strong Category 2 storm, which the Saffir-Simpson hurricane wind scale classifies as extremely dangerous. 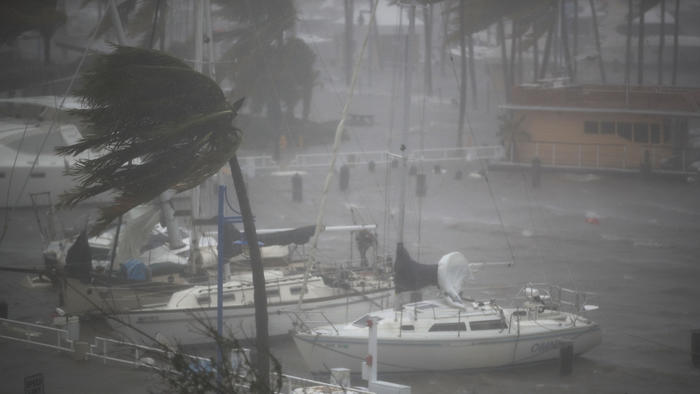 The University of Central Florida warned students of possible tornadoes on the main campus and told them to seek shelter immediately. 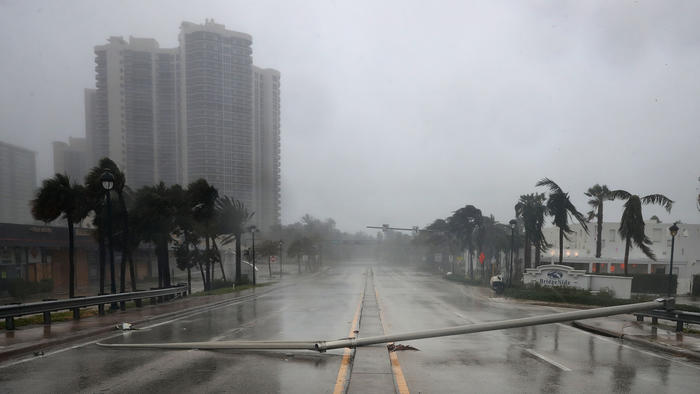 The storm has already caused significant damage across the state: more than 2 million utility customers were without power.

In downtown Miami two cranes collapsed in the strengthening winds.

In Palm Bay, a tornado destroyed six mobile homes off Indian River Drive but did not injure anyone, police said. 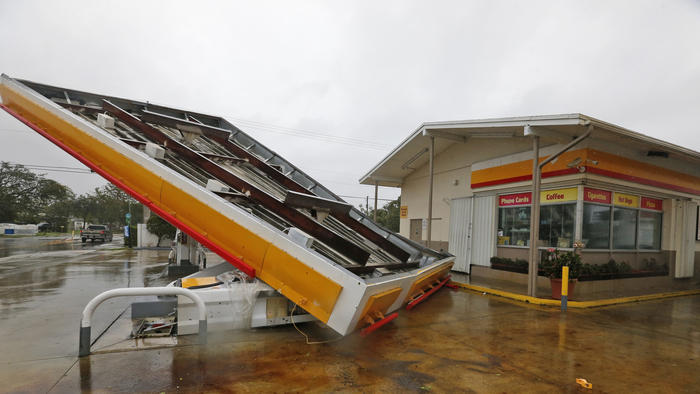 “This is a life-threatening situation,” Gov. Rick Scott said. “Remember, in Southwest Florida the storm surge comes after the strongest winds.

Do not think the storm is over when the wind slows down. Local officials will let you know when it is safe to go out.

The storm surge will rush in and could kill you.” 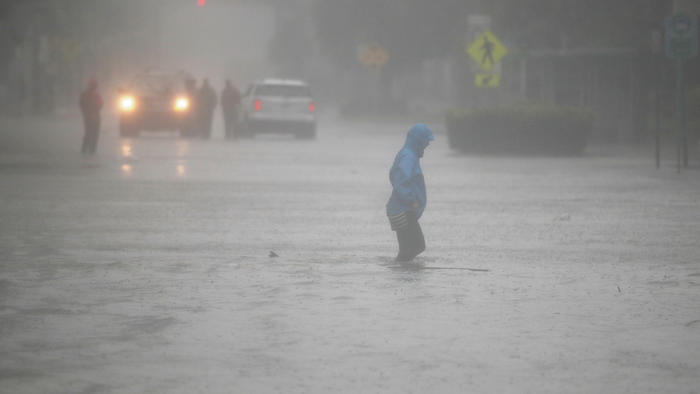 As Irma battered Naples, Scott left the Emergency Operations Center in Tallahassee — where the statewide response to the storm is coordinated — to travel to Pensacola.

Aides said he would be better positioned to fly to South Florida to review storm damage on Monday. Scott is expected to stay the night in Pensacola. 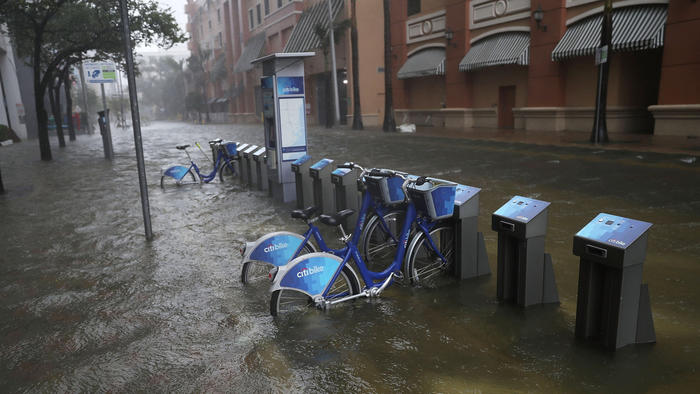 Meteorologists predict the storm will plow into the Tampa Bay area by early Monday morning.

Orlando is no longer within the cone of uncertainty, but the storm is nearly 400 miles wide and danger remains, particularly from possible tornadoes. 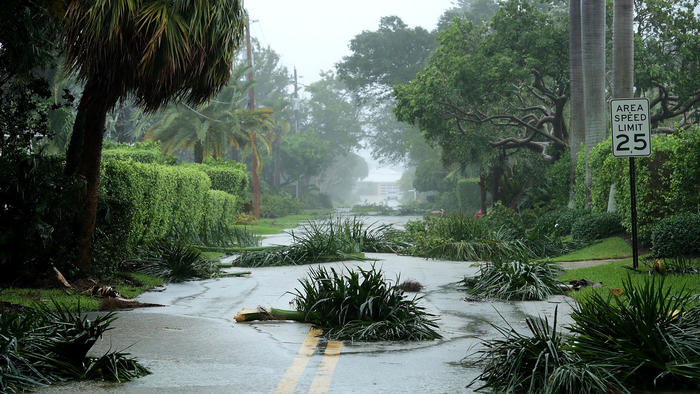 A sheriff’s deputy and a corrections officer in South Florida were killed in a head-on collision early Sunday morning, according to Kerri Wyland, a spokeswoman for Scott.

The crash occurred in Hardee County, about 50 miles east of Sarasota. 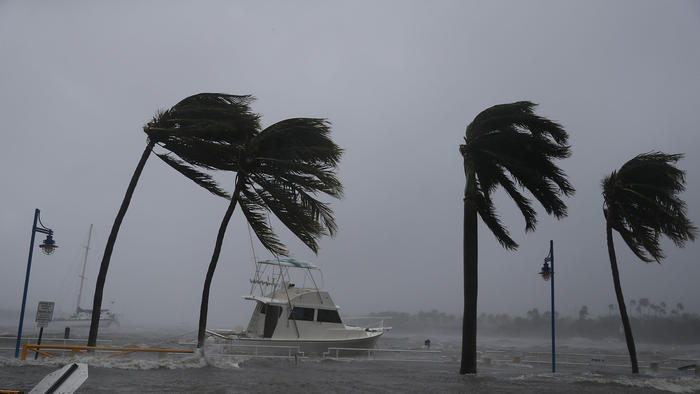 About 2 million homes and businesses — mostly concentrated in South Florida — were without power at 3:30 p.m., according to the Florida Division of Emergency Management.

That’s about 21 percent of customers in the state.

Jessie Smith, a forecaster for the NWS in Melbourne, said the storm is expected to weaken as it moves north over land, but people throughout the state should not let their guard down. 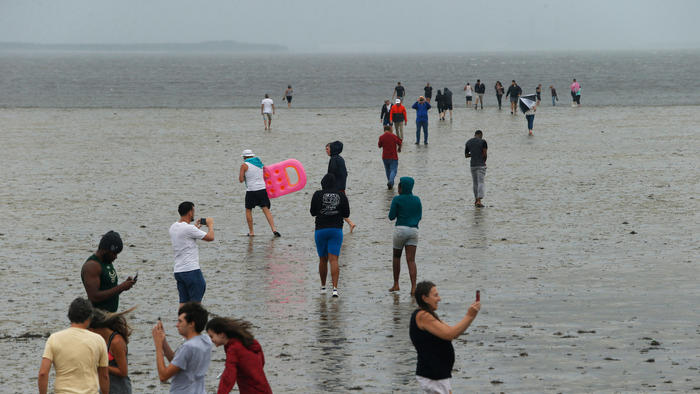 “We’re getting into impact time. This is the time everyone’s been preparing for,” said Smith, emphasizing it was still possible for the storm’s track to deviate.

Tens of thousands of people huddling in shelters watched for updates as the storm swung to the west, now potentially sparing Tampa as well as Miami the catastrophic head-on blow forecasters had been warning about for days.

In the Tampa Bay area, access to all of Pinellas County’s barrier islands, including the popular spring-break destination of Clearwater Beach, was shut off.

Smith said the center of the cone of uncertainty for Irma appeared to be aiming for Fort Myers and Tampa Bay and should continue to make its way north on Monday morning, but Central Florida should prepare for damaging tropical storm-force winds. 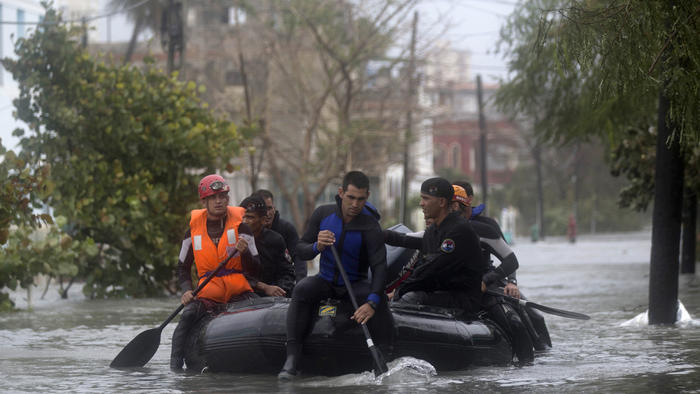 The size of the powerful storm — 350 to 400 miles wide — kept much of the state under hurricane watches and warnings this morning.

Central Florida leaders were not taking any chances, though; Seminole, Orange and Osceola counties in Central Florida already announced that they would have curfews beginning at 7 tonight that will last through Monday evening. 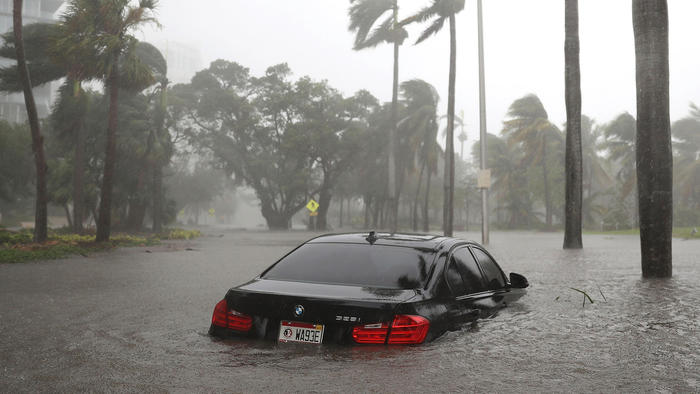 Forecasters expect winds of 56 mph to whirl through parts of Orlando and Central Florida on Sunday evening and reach speeds of up to 75 mph, with higher gusts, according to the NWS. 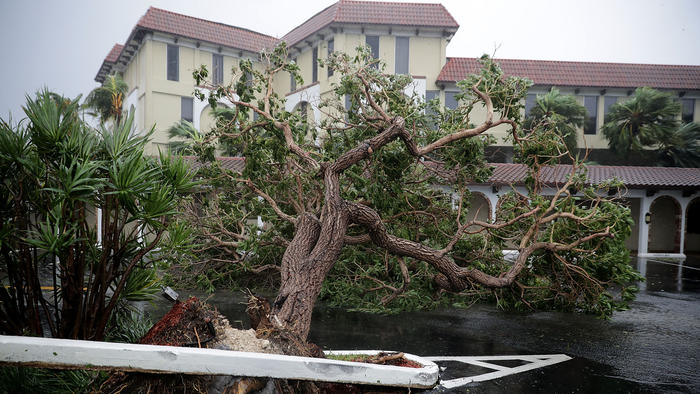 A National Ocean Service station in Key West recorded hurricane-force wind gusts of up to 90 mph, with sustained winds of 71 mph, at 9 a.m. on Sunday.

FEMA chief Brock Long told responders in the Keys earlier Saturday that those who decided to stay “were on their own.” 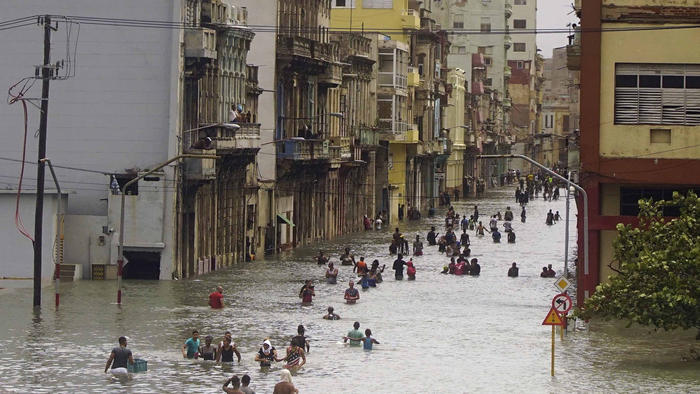 The National Hurricane Center said the storm would bring “life-threatening wind impacts to much of Florida regardless of the exact track of the center.”

The Tampa Bay area has not been struck by a major hurricane since 1921, when its population was about 10,000, National Hurricane Center spokesman Dennis Feltgen said. Now the area has around 3 million people.

More than 75,000 people flocked to shelters by Saturday to escape Hurricane Irma’s potentially deadly winds and storm surge, as more than 6.5 million residents were in an evacuation zone. 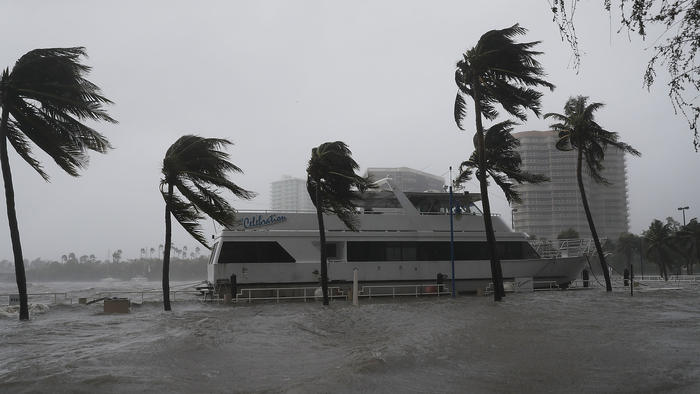 The state said Saturday that more than 400 shelters are open, mostly in schools, churches and community centers.

Much of the state is closed today. Publix grocery stores announced they would close today and Monday, and many schools have said they will be closed at least through Tuesday.

Disney World, Universal and other theme parks are closed today as well. 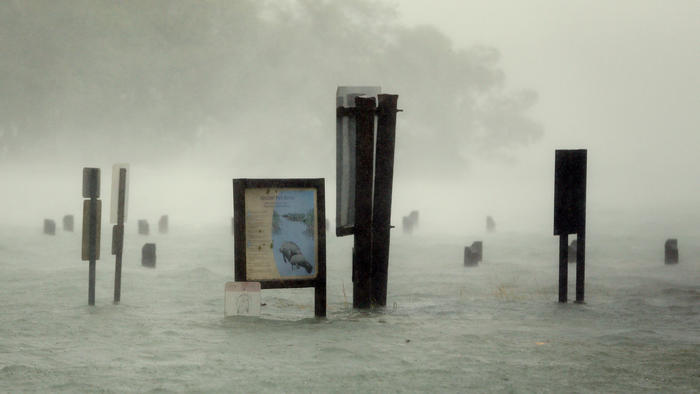 Florida Gov. Rick Scott activated all 7,000 members of the Florida National Guard, and 30,000 guardsmen from elsewhere were on standby.

The powerful storm hammered Cuba and the Bahamas on Friday and Saturday. Irma left a trail of destruction in the Caribbean, killing at least 22 people and devastating the small islands in its path. 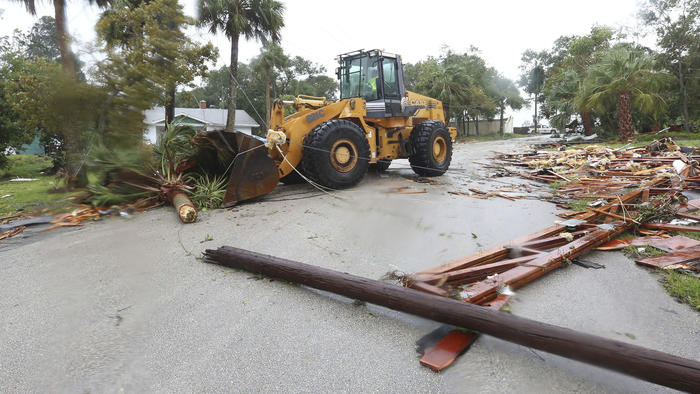 The National Oceanic and Atmospheric Administration in May predicted 11-17 named tropical systems with a minimum of 38-mph winds for the 2017 season.

Staff writer Gray Rohrer and the Associated Press contributed to this report.