Finally, You Can Have Breakfast at Tiffany

There are certain movie scenes that are so iconic that they still retain their importance in the pop-culture lexicon, even decades later.

When Holly Golightly, played by Audrey Hepburn, stepped out of a yellow cab and sauntered to the window of Tiffany & Co. in the 1961 film “Breakfast at Tiffany’s,” with Henry Mancini and Johnny Mercer’s “Moon River” playing in the background, such a scene was created.

As Holly ate a croissant and carried a cup of coffee, she was still, unfortunately, on the outside of the building.

Since 1837, Tiffany’s has been a preeminent luxury jeweler and not a place where you could actually have breakfast.

However, that changed on Friday, with the opening of the Blue Box Café, at the company’s venerable flagship store at Fifth Avenue and 57th Street in New York City.

Menu items will be seasonal and reflect a sophisticated take on a variety of New York dishes.

Located on the fourth floor of the building, which houses a recently renovated home and accessories section, the café is a bright, airy space, with the “Breakfast at Tiffany” breakfast starting at $29.

The offering comes with coffee or tea, followed by a croissant and seasonal fruit and rounded out with your choice of a buttermilk waffle, smoked salmon and bagel stack, truffle eggs, or avocado toast.

The prix fixe lunch, which includes a starter and main courses like the Fifth Avenue salad, with Maine lobster, grapefruit and poppyseed dressing, and an olive-oil poached salmon, with caviar and smashed potatoes, costs $39. 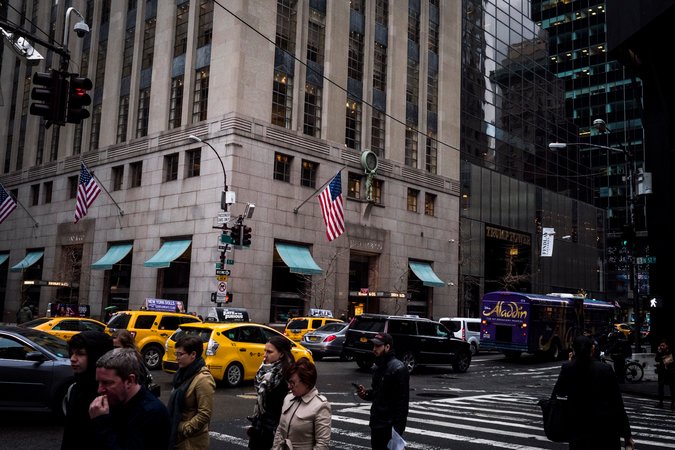 With a nod to the long-heralded regality of the location, there is also a “Tiffany Tea” menu offering ($49), featuring teas by Bellocq, as well as a selection of finger sandwiches and bakery items.

Individual sweets and warm beverages are also available, from an espresso ($5) to a slice of chocolate mousse cake ($12).

The café, outfitted with tables that can accommodate many different group sizes, is accentuated by heavy usage of the company’s classic robin’s-egg blue motif on everything from the walls to the plates.

Only two blocks from the southern boundary of Central Park, the café has an excellent window view of the popular destination.

With many traditional retailers losing customers at their brick and mortar locations to online competitors, there has been an increased focus on cultivating experiences for shoppers.

Tiffany’s recently opened a temporary concept store in Manhattan’s Rockefeller Center, with another location set to open in nearby Grand Central Terminal.

Both stores will feature a selection of jewelry, home items and accessories.

According to Reed Krakoff, the chief artistic officer of Tiffany & Co., who led the redesign of the café and the adjoining home and accessories section, there was an emphasis on showcasing modern luxury.

“The space is experimental and experiential – a window into the new Tiffany,” Mr. Krakoff said in a statement.

For generations of Hepburn fans, the outsized presence of the flagship store has allowed them to retrace her steps from the movie, but now they can truly have breakfast at Tiffany’s, 56 years after the film’s release.