A flood of new Walt Disney World attractions, including an immersive “Star Wars”-themed resort, a “Tron” ride and enhancements to Epcot, were announced Saturday.

Some of the additions will be timed to the 50th anniversary of Disney World in 2021, Bob Chapek, chairman of Walt Disney Parks and Resorts, said at a session of D23, the official Disney fan club in Anaheim, Calif.

The “Tron” ride will be at Magic Kingdom, in a new space adjacent to Space Mountain, Chapek said. The company debuted Tron Lightcycle Power Run at Shanghai Disneyland last summer. 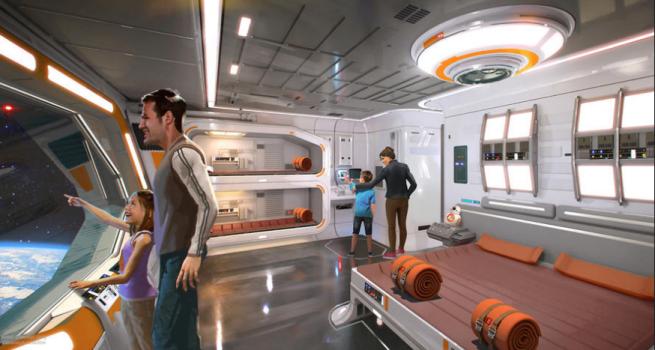 “It’s very thrilling when you’re on the ride,” he said. “The launch system is just really a better experience, I think, than being on a roller-coaster car.”

The Tron attraction, based on the popular movie franchise, has strong visual appeal, Speigel said.

“The Shanghai ride glows, internally and externally,” he said. “It’s one of the greatest-looking facilities at night I’ve ever seen in any Disney park. It’s almost at the level of castle magnificence, really, at night.”

Magic Kingdom’s Tomorrowland Speedway, rumored to be on the chopping block in favor of Tron, will remain in place, a Disney World spokesman said Saturday.

Also at Magic Kingdom, a 1920s-style theater will be constructed near the park’s entrance, although its entertainment was not revealed.

Coming to Disney’s Hollywood Studios is a ride inspired by Mickey Mouse shorts. Mickey and Minnie’s Runaway Railway will have state-of-the-art 3-D effects without the need for guests to wear special glasses, Imagineer Kevin Rafferty said at D23.

“This is not going to be a small attraction,” he said of Mickey Mouse’s first marquee attraction. “This is going to be game-changing.”

An opening date was not announced, but Chapek said that the under-construction Toy Story Land will open in summer 2018.

At Epcot, there will be a new “Guardians of the Galaxy” ride, a new “Ratatouille”-themed ride in France, new films in China and within Mission: Space, which is also getting a table-service restaurant nearby.

The “Guardians” ride will be “rooted in an Epcot story” on the Future World side, Chapek said.

It will take the place of Ellen’s Energy Adventure which is also closing Aug. 13. It debuted in Epcot in 1996, replacing the Universe of Energy attraction that opened with the theme park in 1982.

Matt Roseboom, owner of Orlando-based Attractions Magazine, said the new ride should have more excitement than the Energy attraction.

“It’s definitely time that it goes away,” he said. “The things they’re talking about in that movie are a little outdated now.”

The new family-friendly Ratatouille ride will be similar to the one at Disneyland Paris. It will open by 2021, Disney says.

Chapek told the crowd at the Anaheim Convention Center that there were more changes coming to Epcot.

“The teams are thinking big when it comes to Epcot,” he said. The park marks its 35th anniversary this fall.

On the “Star Wars” side, Chapek announced the name for its land, which is also being built at Disneyland. It will be known on both coasts as Star Wars: Galaxy’s Edge. Chapek said Galaxy’s Edge will open in California before it does in Florida.

The hotel will be an immersive, multi-day experience. It will be Disney’s “most experiential concept ever,” Chapek said. Every window will allow guests to look into space.

“We feel like this could be the start of something very, very big,” he said.

No opening date or location was announced for the luxury hotel.

Other Disney developments emerging from D23 on Saturday included:

• The under-construction gondola system at Disney World will be called Disney Skyliner, and it will connect Caribbean Beach, Pop Century, Art of Animation resorts as well as Epcot and Hollywood Studios. An opening date was not announced.

• Disney Vacation Club’s 15th property — dubbed Disney Riviera Resort — has been planned. It will have a rooftop restaurant and views of nighttime shows at Epcot and Hollywood Studios.

• Disney Cruise Line’s expansion by two ships has now been increased to a third ship, which will bring the fleet of ships to seven by 2023.