Senate Republicans have decided to include the repeal of the Affordable Care Act’s requirement that most people have health insurance into the sprawling tax rewrite, merging the fight over health care with the high-stakes effort to cut taxes.

They also have made a calculated gamble to help speed their bill to passage on a party-line vote: Republicans revealed late Tuesday they would set all of their tax cuts for individuals to expire at the end of 2025, to comply with a procedural requirement.

Their deep cut in the corporate tax rate would remain permanent.

Both the expiration decision and the move to tuck the repeal of the so-called individual mandate into the tax overhaul are attempts by Republicans to solve two problems: math and politics.

Repealing the mandate, a longstanding Republican goal, would save hundreds of billions of dollars over the next decade.

That would free up money that is earmarked to expand middle-class tax cuts.

Setting individual provisions to expire helps hold down the overall cost of the bill, which can add no more than $1.5 trillion to the deficit over 10 years and cannot add to deficits after 10 years.

Mandate repeal could also help secure the votes of the most conservative senators, enabling lawmakers to pass the bill along party lines.

The decision to set individual provisions to expire at the end of 2025 could set up a potential “fiscal cliff” situation then, akin to the one President Barack Obama and Congress faced at the end of 2012.

Those breaks include tax-rate reductions, the near-doubling of the standard deduction and a provision to reduce the number of Americans who would have to pay the estate tax.

Republicans made those changes to stay within Senate rules that allow them to pass the bill on a party-line vote; as promised, they did not set expiration dates on the bill’s corporate rate cut.

If the bill were to become law, and Congress did not seek to make those provisions permanent, tax bills would rise for vast parts of the country in 2026.

The mandate repeal would save more than $300 billion over a decade but result in 13 million fewer Americans being covered by health insurance by the end of that period, according to the Congressional Budget Office.

Republicans said on Tuesday that they would use the savings

— which stem from reduced government spending to subsidize health coverage — to pay for an expansion of the middle-class tax cuts that lawmakers had proposed.

Middle-class measures in the revised tax plan released late Tuesday include expanding the child tax credit to $2,000 a child, up from $1,650 in the original version of the Senate plan, and three reductions in marginal tax rates.

On the House side, members of the Rules Committee met Tuesday evening, one day earlier than scheduled, to pave the way for a floor vote on Thursday.

Democrats said the mandate repeal would underwrite tax cuts for the rich at the expense of people who buy insurance on the individual market.

“The people this is going to hit are middle-class people that ostensibly this whole bill was supposed to be about helping,” said Senator Claire McCaskill, Democrat of Missouri and a member of the Finance Committee.

Average health insurance premiums in the individual market would increase by about 10 percent, but insurance markets would remain stable in almost all parts of the country, the budget office found.

President Trump has urged his fellow Republicans to repeal the mandate in their tax bill, and in recent days, the idea has gained steam in the Senate Republican conference as lawmakers try to come up with a plan that can receive at least 50 votes.

“We’re optimistic that inserting the individual mandate repeal would be helpful,” 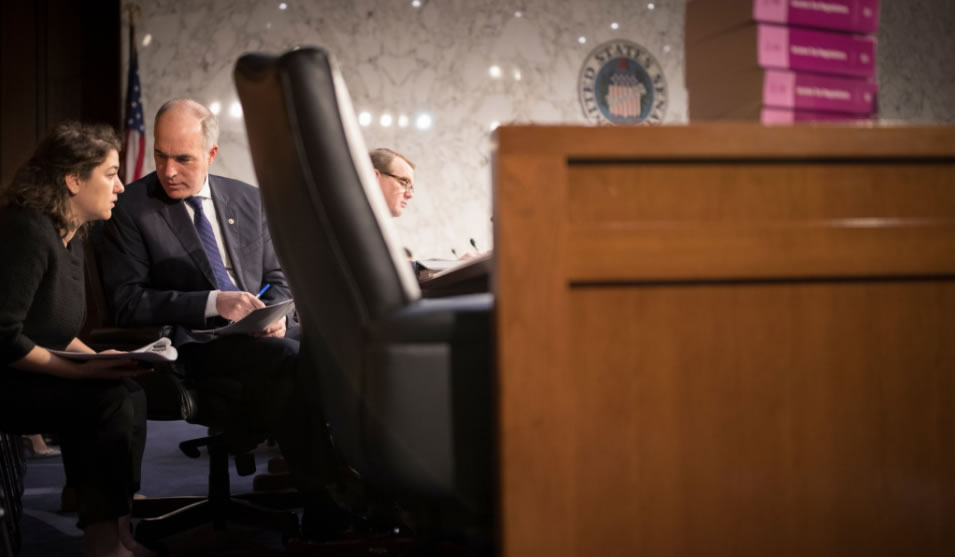 But the move risks reviving the contentious debate over health care that Republicans found themselves mired in for much of the year.

Previous efforts to dismantle the Affordable Care Act have failed, leaving Republicans with little legislative success to show for their congressional majority.

“This is turning a tax bill into a health care bill, with our colleagues getting an hour’s worth of notice,” said Senator Ron Wyden of Oregon, the top Democrat on the Finance Committee.

In a letter on Tuesday, groups representing doctors, hospitals and insurers urged congressional leaders to keep the individual mandate in place.

The groups, which included the American Medical Association and America’s Health Insurance Plans, wrote that “eliminating the individual mandate by itself likely will result in a significant increase in premiums, which would in turn substantially increase the number of uninsured Americans.”

On Tuesday, Republicans were laser-focused on speeding ahead with the tax rewrite and showed no desire to slow down that effort.

House Republican leaders plan to hold a vote on their bill on Thursday and expressed confidence that it would pass the House.

Senate Republicans, who unveiled their tax proposal last week, are planning to vote on their own version the week after Thanksgiving.

On Tuesday, Goldman Sachs analysts raised their odds of a tax package being signed into law to 80 percent, from 65 percent.

“We feel very good where we are,” said Paul D. Ryan, the House speaker and Republican of Wisconsin.

Senator John Thune of South Dakota, a member of the Republican leadership who also serves on the Finance Committee, said he was confident that the tax plan, with the mandate repeal as part of it, could pass the Senate.

But not all senators were as sanguine about its passage and Republicans will need to carefully calibrate votes, given that they hold a narrow 52-seat majority in the Senate.

In tandem with repealing the individual mandate as part of the tax bill, Mr.

Thune said that Republicans were committed to advancing a bipartisan measure to stabilize health insurance markets developed by Senators Lamar Alexander, Republican of Tennessee, and Patty Murray, Democrat of Washington.

That measure, whose fate has been uncertain, would include two years of funding for subsidies to insurers — known as cost-sharing reduction payments — that Mr. Trump decided to cut off last month.

But Ms. Murray rejected any suggestion that the mandate repeal could be paired with her legislation.

“That is the exact opposite of what we should be doing,” she said.

“Americans have stood up and spoken loudly for the last year saying they do not want the markets destabilized, and their provision in the tax bill that they are talking about will really destabilize the marketplaces.”

Mr. Trump had urged lawmakers to end the individual mandate, including in a Twitter post on Monday.

Several conservative senators, like Tom Cotton, Republican of Arkansas, and Rand Paul, Republican of Kentucky, had also called for its repeal as part of the tax overhaul.

Lobbyists seeking changes to the bill were mostly preparing to shift their efforts to the Senate.

The National Association of Realtors flew in 60 of its members from around the country to raise concerns with House members over several provisions in the House bill that the group says will hurt home buyers and erode incentives for homeownership.

The mood they found in their meetings, said Jamie Gregory, the group’s deputy chief lobbyist, was “resignation that this bill is going to pass the House.”