Voters in Maine approved a ballot measure on Tuesday to allow many more low-income residents to qualify for Medicaid coverage under the Affordable Care Act, The Associated Press said.

The vote was a rebuke of Gov. Paul LePage, a Republican who has repeatedly vetoed legislation to expand Medicaid.

At least 80,000 additional Maine residents will become eligible for Medicaid as a result of the referendum.

Maine will be the 32nd state to expand the program under the health law, but the first where voters, not governors or legislators, decided the issue.

Other states whose leaders have resisted expanding the program were closely watching the campaign, particularly Utah and Idaho, where newly formed committees are working to get Medicaid expansion on next year’s ballots.

Supporters, including advocacy groups that collected enough signatures to get the question on the ballot, said the measure would help financially fragile rural hospitals, create jobs and provide care for vulnerable people who have long gone without.

Mr. LePage and other opponents, including several Republicans in the state Legislature, said Medicaid expansion would burden the taxpayers and the state budget, and described it as a form of welfare. 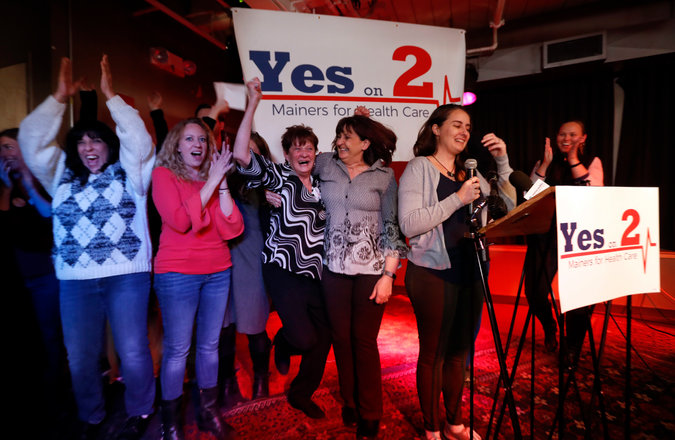 “The truth is that Medicaid expansion will just give able-bodied adults free health care,” Mr. LePage said in a recent radio address. “We don’t mind helping people get health care, but it should not be free. ‘Free’ is very expensive to somebody.”

The pro-expansion side may have benefited from energized public support for government health programs in a year when President Trump and Republicans in Congress tried repeatedly to repeal the Affordable Care Act and cut spending on Medicaid, which covers one in five Americans.

Senator Susan Collins of Maine, one of the few Republicans who firmly opposed the repeal efforts, has been an outspoken defender of Medicaid, although she did not take a position on the ballot question.

The health law gives states the option of allowing any citizen with income up to 138 percent of the poverty level — $16,642 for an individual, $24,600 for a family of four — to qualify for Medicaid, which states and the federal government both pitch in to pay for.

Under the Affordable Care Act, the federal government picked up the cost of new enrollees under Medicaid expansion for the first three years and will continue to pay at least 90 percent.

States cover a significantly larger portion of the expenses for the rest of their Medicaid population.

Maine’s Legislature, which is controlled by Democrats in the House and Republicans, by one vote, in the Senate, could try to block the referendum, but since it voted for Medicaid expansion five times already, supporters and opponents alike believe it is unlikely to meddle.

And the governor has no authority to veto the outcome, although he could try to delay putting it in place during his remaining year in office.

And if Congress eventually succeeds in repealing the Affordable Care Act, states with expanded Medicaid will likely have to scale back their programs.