Local elected officials joined members of the AIDS Healthcare Foundation on Tuesday for a ribbon-cutting ceremony in front of AHF’s new clinic in Orlando at 1701 N. Mills Ave., next to the Orlando Immunology Center, a private clinic specializing in HIV, hepatitis and STD care.

“Florida ranked first among the 50 states in the number of HIV diagnoses last year,” Orlando Mayor Buddy Dyer says. “The people that are being infected in Orange County are up 28 percent in 2016. More than 90 percent of new HIV infections could be prevented by testing and early diagnoses. So, I am so pleased to be here and be part of this opening of this center that is so needed here in Orlando.”

In 2015, Florida had the second-highest rate of HIV diagnoses out of all the states among adults and adolescents in 2015, according to the Centers for Disease Control and Prevention. The Orlando metro area ranks sixth among U.S. cities like Miami and New Orleans for the highest rate of new HIV diagnoses – in 2015, Central Florida added 614 new diagnoses to the state total of 4,849 cases.

“This is something that’s very near and dear to my heart,” Orlando Commissioner Patty Sheehan says. “Between the ages of 25 and 30, I lost over half my friends to AIDS, and this is something that we’ve been fighting for three decades. One of the greatest frustrations in my life is that we are No. 1 in Florida, and we shouldn’t be.” 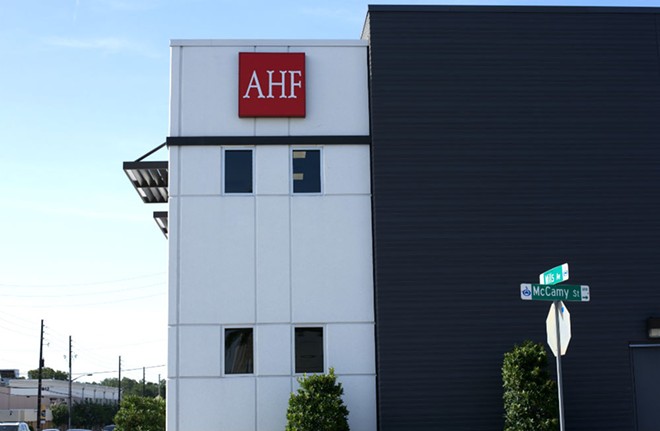 AHF, which is the largest global AIDS organization, says it plans to decrease new infections in Central Florida by providing free HIV testing so people can know their status, including through the use of an HIV mobile testing van; immediate care for those who test positive, regardless of their ability to pay; and support through follow-up care to make sure HIV-positive people stay on track with their medications and ultimately have healthy lives. AHF also plans to offer pharmacy services to patients through an on-site facility. The majority of the foundation’s revenue comes from working with pharmacies, though AHF says 96 cents of every dollar earned at the AHF pharmacy supports the foundation’s global and national HIV/AIDS services.

“AHF Pharmacy is excited to expand our pharmacy services in Florida through our new location in Orlando,” AHF Chief Pharmacy Officer Scott Carruthers said in a statement. “By making pharmacy services available adjacent to our AHF Healthcare Center, we strive to make accessing the lifesaving medications our patients need as convenient as possible to encourage adherence to their treatment regimens and drive down the rates of new HIV infections in the region.”

Michael Weinstein, president and CEO of AIDS Healthcare Foundation, said he wanted to dedicate his remarks to Jahqui Sevilla, a Pulse survivor who rode on AHF’s float dedicated to the victims of the massacre at the gay nightclub in the Rose Bowl parade. Sevilla, 20, was killed earlier this year in a car crash.

“The war against AIDS has not been won,” Weinstein says. “There’s still a lot of work to be done. We will pay for complacency. I think that his building, this complex and all of you can be a shining example of our continued commitment to fighting this epidemic.”

The Orlando clinic offers patient appointments Monday through Friday, 8 a.m. to 5 p.m., which you can schedule by calling 407-204-7000. The GLBT Center of Central Florida, Planned Parenthood and several other locations listed here also offer confidential HIV testing in Orange County. Find the Orlando AHF center or other AHF centers across Florida here.