Qualified residents of 37 Florida counties can now access aid including mortgage assistance and unemployment aid. They are also eligible for late-fee forgiveness on mortgages and payments to JP Morgan Chase.

Osceola County today reported $66 million of damage — the largest so far in Central Florida — as part of damage estimates being tallied throughout the region aimed at determining federal aid efforts.

“Given that the eye of the storm turned more eastern than expected and crossed over Central Florida, these counties experienced several hours of hurricane force winds,

With the designation, residents also should be able to qualify for forgiveness on late fees being offered by JP Morgan Chase on its mortgages, auto loans and credit cards. The bank’s program extends through Sept. 24.

Federal Emergency Management Agency officials said they have seen aid from past catastrophes begin to arrive in as little as a few days or as long as a few weeks.

With counties throughout Florida seeking federal assistance on the heels of historic flooding in southeast Texas, federal relief could take longer than it has in the past.

The speed and amount of federal aid that comes to Central Florida depends on everything from the amount of debris that gets carted away to how well counties prepared for the event, which hit Central Florida with hurricane-force winds early Monday.

Orange County began the work over the weekend to get in the pipeline for federal aid, Orange County Mayor Teresa Jacobs said on Tuesday.

A challenge, she added, was that the federal government had earmarked certain counties that were expected to be impacted but didn’t anticipate that Central Florida would suffer significant damages. 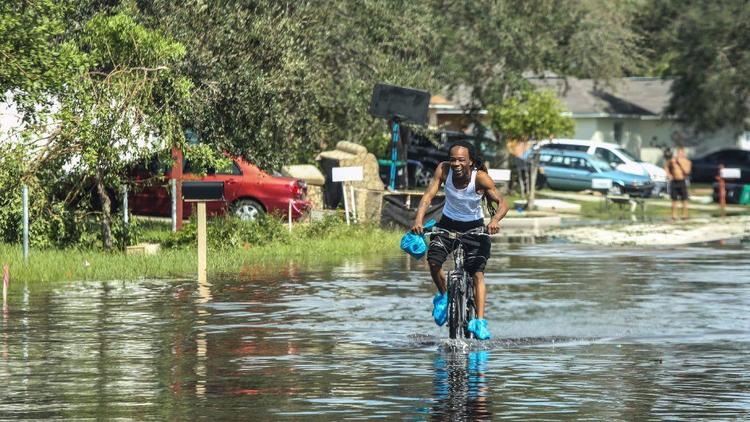 To tally damages, property appraisers Tuesday headed to Central Florida homes and businesses that had reported damage to building officials or 911.

Seminole and Osceola were still in the process of reporting.

Some of the neighborhoods flooded included Sherwood Forest and the Good Samaritan community,

Southwest of downtown Orlando, appraisers drove a sports utility vehicle through flooded streets of Orlo Vista, where a handful of residents waded through waters about knee high.

Singh estimated about 20 to 30 homes there showed signs of flood damage. Waters had receded on other houses, but roads were largely impassable.

Law enforcement and firefighters used drones and inflated rafts to scout the neighborhood, filled with one-story houses built in the 1950s and 1960s.

Elsewhere in Orange, trees toppled onto fences and streets, but an early survey of damage showed few houses crushed by fallen trees.

Sheathed roofs were pulled off of framing and trusses at a few houses, even as neighboring homes lost only a few shingles.

“About 12:30 in the morning, that entire roof ripped off to the plywood,” said Henry Taylor, who lives in a south Orlando house his parents purchased in the 1970s.

His backyard was a mangled pile of roofing material.

For lower-income areas where homes are more likely to lack insurance, recovery is likely to rest on federal aid.

In general, assessment teams tabulate two levels of damage — one for public property, such as bridges, schools, road and parks, and a second for homes and businesses that may qualify for individual assistance.