Here are the top schools among founders who raise big dollars

[dropcap]T[/dropcap]op schools – You don’t need a fancy university degree to launch a startup and secure venture capital. But looking at the data on who gets funded, alumni affiliation sure seems to be a big contributing factor.

For this back-to-school series, Crunchbase is taking a look at how top U.S. universities rank in terms of graduating entrepreneurs who go on to launch funded startups.

We look at which institutions launch the most startups, as well as the most highly capitalized.

But first, a spoiler alert: If you’re looking for surprises, stop reading now.

The results largely confirm what people in venture and startup circles could probably guess.

Stanford graduates more founders who raise more money than any other school.

The rest of the list is rounded out by large Ivy League schools, prestigious technology institutes and some big state research universities.

Who launched the most startups

First, we ranked schools according to the number of alumni-founded startups that raised $1 million or more in the past year.

No big surprises here, though it should be noted that a few universities are seeing some nice year-over-gains.

MIT had 134 alum-funded startups that raised over $1 million, up from 108 in the year-ago period. 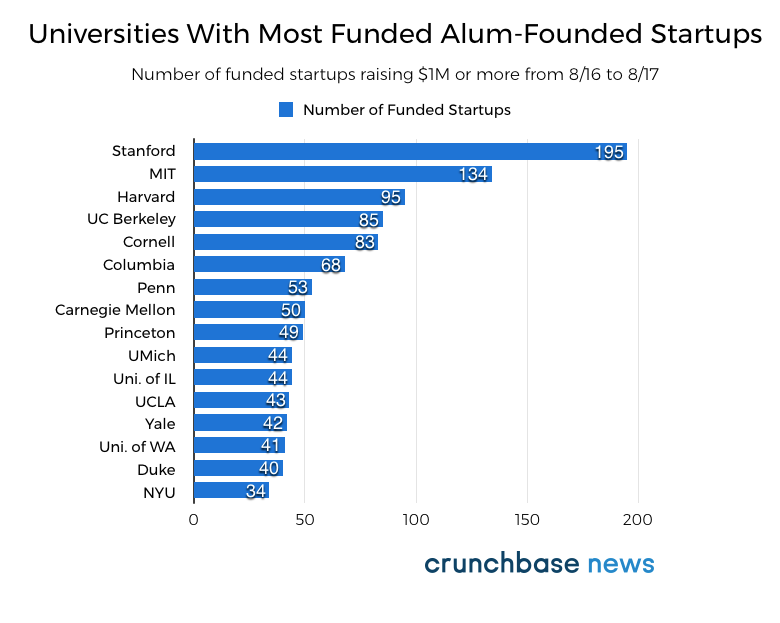 Getting down to business

Again, not a lot of surprises, unless you were thinking that Stanford would once again be on top.

The top spot belongs, instead, to Harvard. (Perhaps it helps that Harvard is the larger business school, with over 1,800 students, compared to a little over 800 at Stanford.) 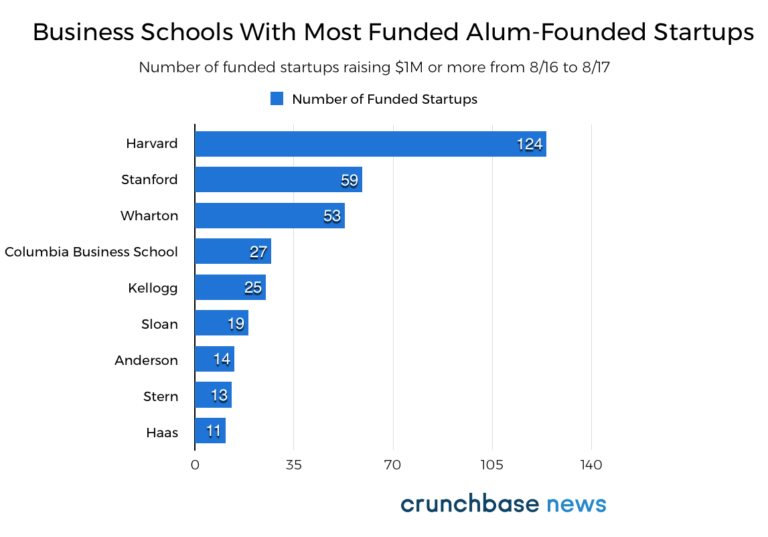 Who raised the most money?

When you look at which colleges have startup founders who raised the most funding, the results get more mixed-up.

Because unicorns and near-unicorns are gobbling up such a big chunk of venture funding, having just one or two heavily funded companies in the mix really skews the results.

It has just four alum-founded startups that raised a million or more in the past year.

But one of them happens to be WeWork, founded by Baruch alum Adam Neumann, which has disclosed fundraising of close to $4 billion this past year.

The University of Chicago is another case in point.

A single company, South Asian ride-hailing app Grab, accounts for more than three-fourths of all funding for alum-founded startups in the past year.

Nonetheless, it’s still fun to see which schools had the most heavily funded startup founders. Here are some of the top ones we found: 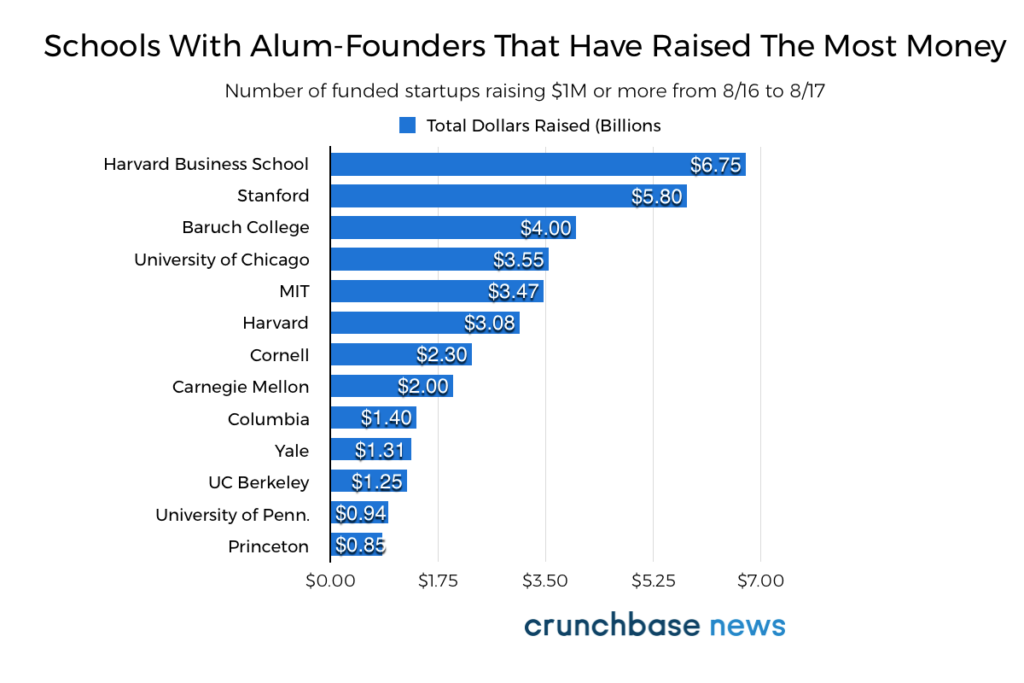 At several schools, a single company accounted for 50 percent or more of total funding.

Overall, the data shows that while founders of hot startups don’t need a specific educational background, it helps to attend a school with certain characteristics.

In particular, founders tend to study at universities that are prestigious and have well-known programs in STEM and business fields.

It also helps to be based in a metro area with a strong tech ecosystem and access to venture capital.

However, the database isn’t comprehensive in this area, so a few business school grads may be in the main university listing and vice versa.

This does not significantly impact rankings, but it does create some margin of error.

Additionally, many business schools grant additional degrees and certifications beyond the traditional MBA, such as Harvard’s AMP (Advanced Management Program).

For the first business school chart showing the total number of funded startups, Crunchbase includes recipients of both degree and certification programs who list themselves as alums in our database.

However, we dropped short-term degree recipients for the largest rounds in the listing of funding totals.